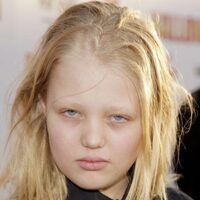 Daeg Faerch net worth and salary: Daeg Faerch is an American actor who has a net worth of $400 thousand. Daeg Faerch was born in San Diego, California in September 1995. His best known roles include starring as a young Michael Myers in the 2007 film Halloween and starring as Michel in the 2008 movie Hancock. Faerch has also appeared in the films Seafood Heaven, Jill, Earl's Your Uncle, Frank's First Love, Andrew the Pirate, Life Ride, Lovin' Scoopful, Blind Doll, A Bullet Beyond Redemption, Angry Ghost, Waiting Room, Coming to Town, Interminal, Front, Lucky Numbers: A Musical, Dark Mirror, The Liar, Wreck the Halls, Digits, Villa Nova, Delaney, Family of Four, Necromance, Run! Bitch Run!, Mental, and Ditch Party. In 2008 he had a recurring role as Ingmar Todd on the television series Pushing Daisies. Faerch is also crediting with doing his own stunts in the films Halloween and Hancock and has starred in many stage productions.