Curt Menefee net worth and salary: Curt Menefee is an American sportscaster who has a net worth of $3 million dollars. Curt Menefee is based in Los Angeles, California. He graduated from Coe College in Iowa, and began his professional broadcasting career in the 90s. He began working in Dallas, Texas initially, serving as a sports anchor for the local CBS affiliate, and hosting a radio show.

He then joined Fox, serving as a broadcaster for their NFL coverage in the late 90s. He worked as on-air anchor for a television station in Florida, and then became the sports anchor for WNYW, Fox's New York affiliate. He then worked for MSG Networks SportsDesk, as an anchor, before becoming the host of Fox NFL Sunday. In addition to hosting NFL coverage and commentary, he has also provided commentary for Major League Baseball and UEFA Champions League games, as well as boxing matches. He is also currently a co-host of "UFC on Fox". 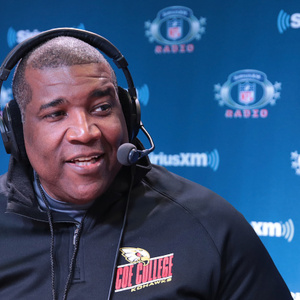