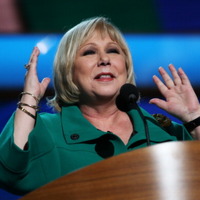 Cristina Saralegui net worth and salary: Cristina Saralegui is a Cuban actress, talk show host and journalist who has a net worth of $30 million. Born in Havana, Cuba on January 29, 1948 Saralegui has been active in the entertainment industry since 1973. She is best known for being the host of her Spanish self-titled show, Cristina. She attended the Academy of Assumption as well as the University of Miami and worked as an intern for Vanidades magazine. In 1979 she worked as the editor at the Spanish branch of Cosmopolitan. She has since appeared on several talk shows and can be seen in two episodes of George Lopez. She is currently married to Marcos Avila and has three children.