Crispin Glover Net Worth: Crispin Glover is an American actor, filmmaker, musician, and author who has a net worth of $6 million. He is best known for his roles in the films "Back to the Future," "Bartleby," "Charlie's Angels," "Beowulf," and "Alice in Wonderland."

Early Life: Crispin Hellion Glover was born on April 20th, 1964 in New York City. His father was actor Bruce Glover, and his mother was actress and dancer Marion Elizabeth Lillian Betty Krachey. His parents named him after the Saint Crispin's Day speech from William Shakespeare's play "Henry V." His middle name was the fake middle name his father would use instead of his given middle name, Herbert. His father is of English, Czech, and Swedish descent, and his mother was of Czech and German heritage. When he was five, his parents moved to Los Angeles, and he grew up there as an only child. He attended the private Mirman School until nineth grade. For high school, he spent two years at Venice High and his senior year at Beverly Hills High School. By the time he was thirteen, Glover already had his own agent. As an adolescent, he landed guest roles on television shows including "Happy Days," "Hill Street Blues," and "Family Ties." Due to his concern of being confined to a television series or character, he began seeking roles in films instead, and in 1983, he made his on-screen debut in the teen comedy "My Tutor." This role came just one year after he graduated high school in 1982.

Early Career: In 1984, he landed a supporting role in the horror film "Friday the 13th: The Final Chapter" as well as a part in the satirical comedy "Teachers." He then worked with director Trent Harris on his film "The Beaver Trilogy." The film was composed of a series of short absurdist vignettes filmed over the course of five years. Glover appears in the third vignette and plays a character who is eccentric and madly obsessed with Olivia Newton-John. While he had already gotten a successful start to his acting career, his role as Marty McFly's father in the 1985 classic "Back to the Future." Glover is actually three years younger than Michael J. Fox who played the role of his son, Marty. For the sequels, Glover was unable to come to an agreement with the producers regarding the character's appearance in subsequent films, so his character's screen time was reduced, and his role was recast. Old footage from the first film was used for the second, and his replacement wore makeup, prosthetics, and shots of him were visually obscured. Because he didn't give his permission for his likeness to be used in the sequel, Glover sued the producer, Steven Spielberg. The Screen Actors Guild put new guidelines in place due to the suit. In 1987, he starred in the dark crime drama "River's Edge," alongside Keanu Reeves. The film received praise from critics and developed a cult following years after its release.

Work in the 1990s and 2000s: He starred in post-modern director David Lynch's 1990 comedy drama film "Wild at Heart," which featured Nicholas Cage, Willem Dafoe and Laura Derm. The film won the Palm D'Or at the Cannes Film Festival and was nominated for an Oscar and a Golden Globe. In 1991, he had a minor role in Oliver Stone's biographical drama "The Doors," which also featured Val Kilmer, Meg Ryan, and Billy Idol. He portrayed Andy Warhol. He had a supporting role in the Oscar nominated 1993 film "What's Eating Gilbert Grape" In 1995, he played a supporting role in Johnny Depp's 1995 directorial debut "Dead Man." His portrayal of villain Thin Man in the 2000 film "Charlie's Angle's" brought him mainstream success with the film grossing over $264 million at the worldwide box office. He reprised his role as the character in the 2003 sequel, which grossed over $259 million worldwide.   He played the title character in the 2001 film "Bartleby," based on the short story by Herman Melville titled "Bartleby: The Scrivener." He had starring roles in the 2002 film "Crime and Punishment" based on the novel by Fyodor Dostoyevsky as well as in the 2003 film "Willard." He starred in the 2005 comedy "Drop Dead Sexy" alongside Jason Lee and Amber Heard.

Throughout his career, Glover has gravitated towards playing eccentric and wacky characters. In 2007, he played a sadistic magician in the horror film "The Wizard of Gore," and he reunited with "Back to the Future" director Robert Zemeckis for his part as the monster Grendel in the film version of the epic "Beowulf." He played the role of Stayne, the Knave of Hearts, in Tim Burton's 2010 film "Alice in Wonderland," which also featured Johnny Depp and Anne Hathaway. The movie was a commercial and critical success, grossing over $1 billion worldwide and receiving three Golden Globe nominations and two Academy Awards. In 2012, he starred in the comedy thriller "Freaky Deaky." In 2015, he starred alongside John Cusack and Robert De Niro in the film "The Bag Man," and he was featured in the miniseries "Texas Rising." His career was noticeably less busy in the latter half of the 2010s. His next film releases would come in 2018 with the thriller "We Have Always Lived in the Castle" and the comedy "The Con Is On." In 2019, he starred in the thriller "By the Rivers of Babylon," and he was featured in the television series "American Gods."

Personal Life and Other Works: Glover has never been married and has no kids. He has cited his busy career as a reason for not having children. He owns a historic property in the Czech Republic and has a home in LA. In addition to his acting, Glover has written between 15 to 20 books and published five through his publishing company Volcanic Eruptions. He directed the surreal 2005 film "What Is It?" and the drama "It Is Fine! Everything Is Fine.," which premiered at the 2007 Sundance Film Festival.

Real Estate: In 1992 Crispin paid $525,000 for a home in LA's Silverlake neighborhood. Today the home is likely worth around $3 million based on comparable local sales.

In 2003, Crispin purchased a 20-acre estate in Konarovice, Czech Republic, roughly 45 minutes outside of Prague. The main house has 17 bedrooms. The property dates back to the 17th century and Crispin purchased the home so he could build his own sets on the grounds for future film productions. He converted the stables into an 18,000 square-foot production space. He also acquired a flock of peacocks to roam the grounds, today there are more than 30. The property's two ponds feature a dozen swans. 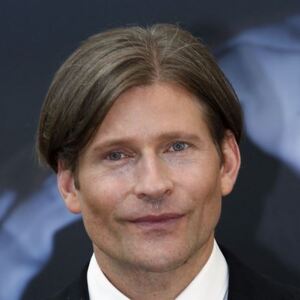