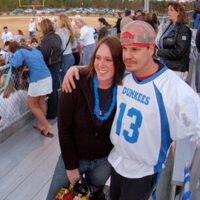 Craig Sheffer Net Worth: Craig Sheffer is an American actor who has a net worth of $1 million. Craig Sheffer was born in York, Pennsylvania in April 1960. Sheffer competed in regional and state high school drama competitions at 15. At one point he slept under the marble staircase in the Grand central Terminal and sold newspapers. His first role came in the TV series One Life to Live in 1982. He played Mick in the TV series Teen Wolf from 1986 to 1987. His next major TV role came as Keith Scott on One Tree Hill from 2003 to 2012. Sheffer has starred in the films That Was Then… This Is Now, Fire with Fire, Some Kind of Wonderful, Baby Cakes, Nightbreed, A River Runs Through It, The Program, Fire in the Sky, Head Above Water, Bliss, Sleep With Me, Hellraiser: Inferno, The Mark, and Bad Ass. He has appeared in episodes of Married with Children, Psych, Criminal Minds, The Mentalist, CSI: Crime Scene Investigation, and Major Crimes. Sheffer also directed the straight to DVD movie American Crude in 2008. After filming Nightbreed Craig was diagnosed with cancer which went into remission.