How much is Craig T. Nelson Worth?

Craig T. Nelson Net Worth and Salary: Craig T. Nelson is an American actor who has a net worth of $50 million dollars. Craig T. Nelson (the T. stands for Theodore) was born on April 4, 1944 in Spokane, Washington where in high school and was the quarterback of the football team. He attended Central Washington University studying criminology as he wanted to work for the CIA but he dropped out and went to Yakima Valley Community College to study English literature, but he dropped out again. He eventually received a drama scholarship to the University of Arizona. When he first moved to Los Angeles he worked as a security guard at a soap factory in the day and took acting classes at night. Nelson began his entertainment career as a comedian. He was an early member of The Groundlings comedy troupe. He is best known for his Emmy-winning role as Hayden Fox on the TV series "Coach", Deputy Ward Wilson in the 1980 film "Stir Crazy", Steven Freeling in the 1982 film "Poltergeist", the Warden in "My Name is Earl", and Mr. Incredible in the 2004 film "The Incredibles" and its 2018 sequel. From 2010 to 2015 he starred in the TV series "Parenthood". Nelson is a motorsports fan and an avid racer. He has participated in a number of celebrity Grand Prix races. He has been married to Doria Cook-Nelson since 1987. He has three children with his former wife Robin McCarthy.

Craig T. Nelson Real Estate: In 1995, Craig and his second wife Doria purchased a five-acre plot of oceanfront land on the Hawaiian island of Kauai. They eventually built a 2,700 square foot home on the property. In July 2019 they listed the home for sale for $14 million. They also own a large home in the Point Dume area of Malibu which Craig purchased as an empty lot in 1985. Nearby similar homes are worth $10-15 million. 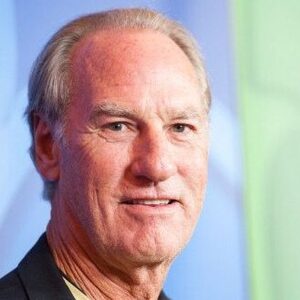