Constance Marie Net Worth: Constance Marie is an American actress and dancer who has a net worth of $5 million. Constance Marie Lopez was born in East Los Angeles, California in September 1965. She danced in the musical Cosmopolis in Japan at 19. After returning to Los Angeles she was discovered by David Bowie's dance choreographer in a club.

Out of 500 dancers she was selected to tour with Bowie for his Glass Spider Tour in 1987. She first appeared in the film Salsa in 1988 as a dancer. From 1988 to 1989 she starred as Penny Rivera in the TV series Dirty Dancing. From 1989 to 1990 she starred as Nikki Alvarez in Santa Barbara. Marie starred as Gabriella Diaz in Union Square from 1997 to 1998 and as Toni Brigatti in the series Early Edition from 1998 to 2000. She starred in For Your Love from 2000 to 2001 and the series American Family in 2002. From 2002 to 2007 Constance starred as Angie Lopez in the series George Lopez. Since 2011 she has played Regina Vasquez in the television series Switched at Birth. She has starred in the movies Selena and Sweet Surrender. Constance Marie has won an ALMA Award, Gracie Allen Award, and two Imagen Foundation Awards. She is engaged to Kent Katich and has a daughter. 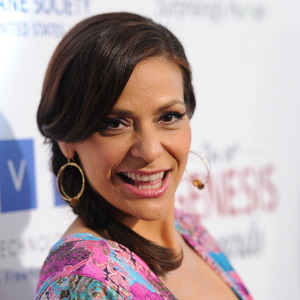