What is Colin Farrell's Net Worth and Salary?

Colin Farrell is an Irish actor who has a net worth of $80 million. Colin Farrell has had worldwide success for roles in films such as "Minority Report," "In Bruges," and "The Lobster."

Farrell was born on May 31, 1976 in the Castleknock suburb of Dublin. His mother's name was Rita and his father was Eamon, who ran a health food shop and played football for Shamrock Rovers Football Club. He was raised with his older brother, Eamon Jr., and his two sisters, Claudine and Catherine.

He attended St. Brigid's National School and then an all-boys private school, Castleknock College. He then attended Gormanston College in County Meath. He developed an interest in acting from a young age and also attended the Gaiety School of Acting. He dropped out of the school upon being cast in the BBC drama, "Ballykissangel," during its fourth and fifth seasons.

After his debut in "Ballykissangel," Farrell made his film debut in "The War Zone" and soon after acted in "Ordinary Decent Criminal" opposite of Kevin Spacy and Linda Florentino. Farrell's first few American films were not particularly successful but his successive roles earned great critical praise and were commercial successes. His performances in "Phone Booth," "The Recruit," and "S.W.A.T." were all well-received.

He experienced further success after being cast opposite of Tom Cruise as an agent in 2002's "Minority Report" and in the 2003 film, "Daredevil," where he played the role of the villain, Bulleye, opposite of Ben Affleck. In addition to getting further attention in the film industry, these roles also helped Farrell earn a spot on Company Magazine's "Sexiest Man" list.

In 2003, Farrell starred as a criminal plotting a bank robbery in the dark Irish comedy film, "Intermission," which held the record for highest-grossing Irish independent film for three years and has since become a cult classic. He continued appearing in independent films, including "A Home at the End of the World," which earned Farrell very favorable reviews from noted critics like Roger Ebert. He then played the title role in the 2004 Oliver Stone film "Alexander."

He then starred as the lead role of Captain John Smith in the 2005 film, "The New World," which was nominated for an Academy Award. The film was very highly reviewed, despite its rather limited theater release. He also starred in "Ask the Dust," based on a John Fante novel, the same year. The following year, he had a role in "Miami Vice," opposite of friend and fellow actor Jamie Foxx. He also starred in the 2008 Woody Allen film, "Cassandra's Dreams," opposite Ewan McGregor. 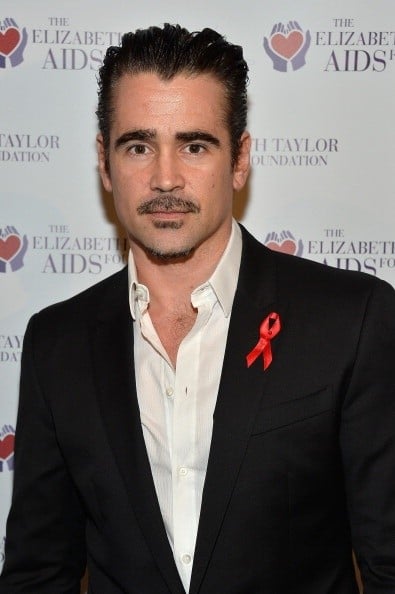 One of his first truly critically-acclaimed roles came in 2008 with his starring role in director Martin McDonagh's film, "In Bruges." The film premiered at the 2008 Sundance Film Festival and was very highly-reviewed. For his performance, Farrell won his first Golden Globe Award in the category of Best Actor in a Motion Picture Musical or Comedy. The same year, he received favorable reviews for his participation in the documentary film, "Kicking It," which followed six homeless men from around the world who attempted to qualify for the Homeless World Cup. He also starred across Edward Norton in the 2008 film, "Pride and Glory."

In 2009, Farrell appeared in the film "The Imaginarium of Doctor Parnassus," along with Johnny Depp and Jude Law, all of whom helped complete Heath Ledger's role following the actor's tragic death. He also starred in the film "Triage," as a war correspondent. For the role, Farrell lost 30 pounds and the film was positively reviewed, though not widely released due to its handling of sensitive topics. He next starred in "Ondine," in 2009, which was shot in Ireland and also featured at the time child star Alison Barry.

The following years saw Farrell starring in more blockbuster films, though he continued taking roles in independent pictures as well. He starred in the 2011 comedy "Horrible Bosses" along with Jennifer Aniston, Jason Bateman, Charlie Day, Jamie Foxx, and Jason Sudeikis. He also starred in the 2012 remake of "Total Recall," originally starring Arnold Schwarzenegger. In 2013, he starred in the thriller "Dead Man Down" and in 2014 the film adaptation of "Winter's Tale." In 2015, Farrell starred in "The Lobster," which received numerous accolades and high praise. He also appeared in the "Harry Potter" spin-off, "Fantastic Beasts and Where to Find Them," in 2016, the Steven McQueen thriller, "Widows," in 2018, and the live-action Tim Burton of "Dumbo" in 2019.

Farrell has been linked to a number of notable women. He dated actress and singer Amelia Warner from 2000 to 2001. He was seen on numerous occasions with singer Britney Spears, model Nicole Narain, model Josie Maran, and actresses Angelina Jolie and Demi Moore throughout the early to mid-2000s. In 2003, he had a son, James, with model Kim Bordenave. James was diagnosed with Angelman syndrome, a rare genetic disorder.

In 2007, Farrell began dating an Irish medical student, Muireann McDonnell. They broke up in 2008 and he began dating Emma Forrest, a writer who later discussed their relationship in her memoir, "Your Voice in My Head." In 2009, Farrell had his second son, Henry, with Polish actress Alicja Bachleda-Curuś, who he had worked with on the film "Ondine." They ended their relationship in 2010.

Farrell has been caught up in a number of scandals. In 2005, Farrell check himself into a rehabilitation center to seek help for his recreational drug and painkiller addiction. In January of 2006, Farrell sued his ex-girlfriend Nicole Narain and the Internet Commerce Group (ICG) for releasing a sex tape the couple had made in 2003.