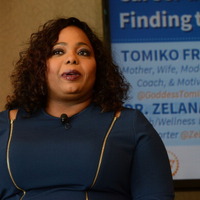 Cocoa Brown net worth: Cocoa Brown is an American actress and comedian who has a net worth of $500 thousand. Cocoa Brown was born in Newport News, Virginia in October 1972. Brown is best known for playing the role of Jennifer on the TV series Tyler Perry's For Better or Worse. Her first role came in the short Blue Moon in 2003. Brown's best known role came starring as Jennifer on the television series For Better or Worse from 2011 to 2012. She has starred in the movies Lakeview Terrace, An American Carol, Dukes and the Dutchess, Friendship!, and The Single Moms Club. Brown has also appeared in episodes of the TV series The Young and the Restless, Las Vegas, ER, Breaking Bad, Victorious, 2 Broke Girls, Austin & Ally, The Soul Man, Don't Trust the B—- in Apartment 23, and Psych. Before acting Brown earned a Masters in Secondary Education and worked in advertising for Feld Entertainment which owns Ringling Bros. and Barnum & Bailey Circus and Disney on Ice. After just seven months Brown won the Washington Comedian of the Year Award. She has been featured on the TV series Comic Groove, BET's Comicview, The Arsenio Hall Show, and Comics Unleashed.