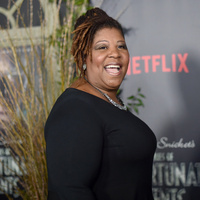 Cleo King net worth: Cleo King is an American actress who has a net worth of $3 million. Cleo King was born in St. Louis, Missouri in August 1962. She has some 90 acting credits to her name and starred as Helene Parks on the television series Boston Public from 2001 to 2002. In 2003 she starred as Francine Hill on the TV series The Brotherhood of Poland, New Hampshire. King starred as Nanny on the series So Notorious in 2006 and as Aunt Lou Marchbanks on the series Deadwood in 2006. One of her best known roles came starring as Grandma on the television series Mike & Molly from 2010 to 2016. She began starring as Eleanora Poe on the TV series A Series of Unfortunate Events in 2017. She has also starred in several films and episodes of TV series including The Cosby Show, Six Degrees of Separation, The Wayans Bros., Living Single, Hangin' with Mr. Cooper,  Murphy Brown, Bubble Boy, and more.