Clea DuVall Net Worth: Clea DuVall is an American actress who has a net worth of $1.5 million. Clea DuVall was born in Los Angeles, California in September 1977. She worked in a coffee shop before acting. She made her TV debut in the series Dangerous Minds in 1996 and her film debut the same year in the movie Little Witches. In 1998 Clea starred as Jana in the film Can't Hardly Wait and as Stokely "Stokes" Mitchell in the movie The Faculty. DuVall also starred in the movies She's All That, The Astronaut's Wife, But I'm a Cheerleader, Girl, Interrupted, Ghosts of Mars, The Laramie Project, Identity, 21 Grams, The Grudge, Zodiac, The Killing Room, and Argo. She starred as Sofie in the TV series Carnivale from 2003 to 2005 and as FBI Agent Audrey Hanson in the series Heroes from 2006 to 2007. From 2012 to 2013 she had a recurring role as Wendy Peyser on the TV series American Horror Story. In 2013 Clea DuVall won a Screen Actors Guild Award for Argo. In 1999 she was nominated for a Blockbuster Entertainment Award for Favorite Female Newcomer for The Faculty. 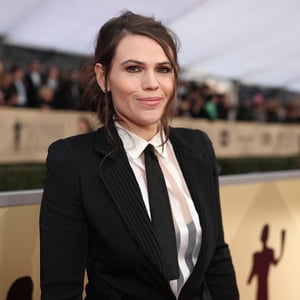