Cillian Murphy net worth and salary: Cillian Murphy is an Irish film and theater actor who has a net worth of $20 million. Cillian Murphy first pursued a career as a rock musician before appearing in films such as "28 Days Later," "Batman Begins," "Inception," and "Scarecrow."

Early Life: Cillian Murphy was born on May 25, 1976 in Douglas, County Cork, Ireland. He was raised in Ballintemple, Cork by his father who worked for the Irish Department of Education and his mother, who was a French teacher. Murphy was playing music and writing songs by the age of ten. While attending the Catholic secondary school Presentation Brothers College, he performed well academically but got in trouble often. It was there, however, that he got his first taste of performing when he participated in a play and his English teacher (novelist William Wall) encouraged him to pursue acting. However, he pursued a career as a musician, singing and playing guitar in several bands with his brother. The pair were influenced by the Beatles and Frank Zappa and named their band The Sons of Mr. Greengenes. They were offered a five-album record deal with Acid Jazz Records but they didn't sign the contract. Murphy later confessed that he was glad they hadn't, in retrospect. In 1996, he began studying law at University College Cork but failed his first-year exams, preferring to instead focus on playing with his band. While at UCC, he performed in two plays, "Observe the Sons of Ulster Marching Towards the Somme," and "Little Shop of Horrors."

Acting Career: Even though he started his career as a rock musician, Cillian Murphy rose to prominence as an actor. Murphy landed an audition at the Corcadorca Theatre Company in September 1996 and debut performance in the professional play "Disco Pigs" later that year. "Disco Pigs" was originally intended to only run for three weeks, but it ended up touring throughout Europe, Canada, and Australia for two years. With that, Murphy dropped out of university and left his band. After the run of "Disco Pigs" was up, Murphy intended to go back to playing music but he secured a talent agent instead, and his acting career took center stage. Murphy starred in numerous Irish and British film and stage productions throughout the late 1990s and early 2000. During this period, he relocated to Dublin for a few years, then settled in London in 2001.

It was his leading role as Jim in Danny Boyle's post-apocalyptic flick "28 Days Later" (2002) that helped Cillian attract international attention. "28 Days Later" became a sleeper hit in North America and a success worldwide and put Murphy on the map of brand new fans. His performance earned him nominations for Best Newcomer at the Empire Awards and Breakthrough Male Performance at the MTV Movie Awards.

In 2003 he went back to the stage in Chekhov's "The Seagull" at the Edinburgh International Festival. He then starred opposite Colin Farrell in 2003's "Intermission," which became the highest-grossing Irish independent film in Irish box office history. Later that year he had a small role in "Cold Mountain," sharing screen time with Jude Law. He also appeared in "Girl with a Pearl Earring" with Scarlett Johansson. In 2004, he was back to the stage and toured Ireland with the Druid Theatre Company.

What followed next were more star-making roles including the 2010 blockbuster "Inception," as well as in the superhero film "Batman Begins" (a role later reprised as cameos in "The Dark Knight" and "The Dark Knight Rises"), and in the thriller "Red Eye." At the same time, he kept returning to the theatre.

Since 2013, Murphy has played the lead role of Tommy Shelby in the highly acclaimed and praised BBC series "Peaky Blinders," a series about a criminal gang in 1920's-era Birmingham, England. In 2014, he co-starred with Jennifer Connelly in the drama "Aloft" and the 2015 Ron Howard-helmed "In the Heart of the Sea." In 2016, Murphy portrayed World War II Army soldier Jozef Gabcik in "Anthropoid" alongside Jamie Dornan. In 2017, Murphy had a minor role as a shell-shocked army officer in Christopher Nolan's epic war film "Dunkirk." He has been nominated for and won many awards for his ongoing work on "Peaky Blinders."

Personal Life: While critics have often noted him for his chameleonic performances in diverse roles, fans are mesmerized by Murphy's distinctive blue eyes. Irrespective of the worldwide fame he gained, Murphy has never gotten used to the celebrity circuit and constantly makes sure his private life remains under wraps. That's why this Ireland native has no desire to move to Hollywood and lived in London for 15 years before moving back to Dublin in 2015 with his family. Reserved and very private, Murphy does not have a stylist or a publicist and prefers to travel without an entourage and attend film premieres alone. He has stated in interviews that he intentionally practices a lifestyle that will have no interest in the media, paparazzi, or tabloids.

Music remains a large part of Cillian's life, although he no longer plays in a band. He still regularly plays music with friends, on his own, and writes songs and goes to shows.

An avid runner, Cillian was a vegetarian for many years and only began eating meat again for his role in "Peaky Blinders." 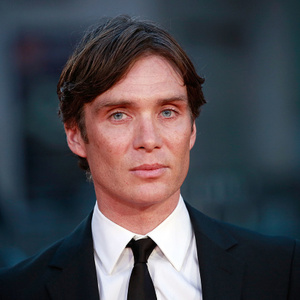