How much is Christopher Massey Worth?

Christopher Massey Net Worth: Christopher Massey is an American actor, comedian, and rapper who has a net worth of $300 thousand. Christopher Massey was born in Nashville, Tennessee in January 1990. He is best known for playing the role of Michael Barret in the television series Zoey 101. As a kid Christopher appeared in commercials for Pop Tarts and Cap'n Crunch. He won the Outstanding Young Performer in Live Theatre award in 2002 for playing Young Simba in The Lion King. In 2002 he appeared in episodes of the TV series The Parkers, That Was Then, and The District. His best known role came starring as Michael Barret in the TV series Zoey 101 from 2005 to 2008. Massey has also appeared in episodes of the TV series Yes, Dear, That's So Raven, Everybody Hates Chris, and Switched at Birth. He was nominated for an Emmy award for Zoey 101 in 2006. He won an Emmy in 2005 for One to Watch-Male. He also won two Young Artist Awards for Best Young Ensemble Performance in a TV Series. He formed a group known as the Massey Boyz with his friend Mario and released the single " Ridin Wit My Brother" in 2009. Christopher is good friends with Miley Cyrus. He has also starred in commercials for Pepsi, Disney, and Burger King. 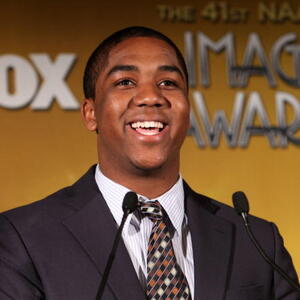