Christa Miller Net Worth: Christa Miller is an American actress who has a net worth of $200 million dollars. Though, it should be noted that the majority of her net worth is attributable to her husband since 1999, Scrubs producer Bill Lawrence.

Christa Miller was born in New York City, NY in May 1964. As a child she modeled and appeared in a commercial for Wonder Bread and an ad for Ivory soap. Miller moved to Los Angeles, California and was featured in the first edition of Maxim magazine. From 1985 to 1988 she had a recurring role on the television series Kate & Allie. During the 1990s she appeared in episodes of Northern Exposure, The Fresh Prince of Bel-Air, Party of Five, and Seinfeld. One of her best known roles came playing Kate in The Drew Carey Show from 1995 to 2002. From 2002 to 2003 Christa provided the voice of Cleopatra in the series Clone High.

From 2001 to 2010 she played Jordan Sullivan on the series Scrubs. Starting in 2009 Miller played Ellie Torres in the show Cougar Town. In 2014 she won a Gracie Allen Award for Outstanding Female Actor in a Supporting Role in a Comedy Series on Cougar Town. She has also been nominated for two Satellite Awards.

Christa married Bill Lawrence in 1999 and the couple has three children. Two of her pregnancies were written into the show Scrubs.

In 2003 they paid $4.5 million for an incredible mansion high up on a Malibu cliff in the Point Dume area. They bought the home from Pat Benatar. They sold the home in 2017 for$21 million.

In 2007 they paid $12.6 million for a six-bedroom home in Los Angeles. The seller was Dallas actress/entrepreneur Victoria Principal. They have tried to sell this home (so far unsuccessfully) a number of times over the years. They last listed in 2013 for $11 million. 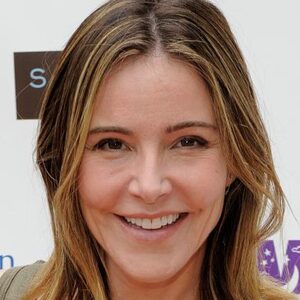