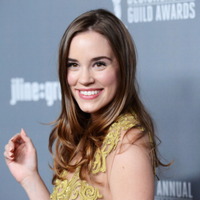 Christa B. Allen Net Worth

Christa B. Allen Net Worth: Christa B. Allen is an American actress who has a net worth of $3 million dollars. Christa Brittany Allen was born in Wildomar, California in November 1991. She is best known for playing the role of Charlotte Grayson on the television series Revenge. Christa is the youngest of five siblings and has four brothers and four stepbrothers who are all older than her. She started acting lessons at nine years old and acted in student films and commercials. Her first role came in the 2004 film 13 Going on 30. In 2006 she starred in the TV series Cake and appeared on the show Medium, as well as in the film A Merry Little Christmas. She appeared in episodes of Cory in the House, The Suite Life on Deck, Grey's Anatomy, ER, CSI: Crime Scene Investigation, Wizards of Waverly Place, and Cold Case. Allen's breakout role came starting in 2011 as Charlotte Grayson on the ABC series Revenge. In 2007 she won a Young Artist Award for Best Performance in a TV Series – Leading Young Actress for Cake. In addition to playing a teenage version of Jennifer Garner's character in 13 Going on 30, she played the same role in Ghosts of Girlfriends Past.