Chloë Grace Moretz Net Worth: Chloë Grace Moretz is an American actress who has a net worth of $12 million. She is most recognized for her work in film including the horror movie "The Amityville Horror," the romantic dramedy "500 Days of Summer," the action comedies "Kick-Ass" and its sequel "Kick-Ass 2," the teen drama "If I Stay," the dark comedy "I Love You, Daddy," and the thriller film "Greta."

Early Life and Child Acting Career: Chloë Grace Moretz was born on February 10th, 1997 in Atlanta, Georgia. She was raised in Cartersville, a suburb outside of Atlanta. Her father worked as a plastic surgeon and was heir to the Moretz hosiery business, which sold in 2011 for $350 million. She has four older brothers and has described her family as being religious, specifically southern Baptist. In 2002, her brother was accepted into the renowned Professional Performing Arts School, and she moved there with him and her mother. She often helped him rehearse lines, which sparked her interest in acting. Her first acting job came in 2004 with a minor guest star appearance the CBS crime drama television series "The Guardian." The next year she guest starred on the television show "My Name Is Earl," and she had a supporting role in the horror film "The Amityville Horror" as well as in the drama film "Heart of the Beholder." In 2006, she was featured in the horror films "Wicked Little Things" and "Room Six," and she had a role in the Martin Lawrence led comedy film "Big Momma's House 2." She made a couple of guest appearances on the ABC show "Desperate Housewives" that year as well. She had a recurring role from 2007 to 2008 in the first season of the Golden Globe nominated ABC series "Dirty Sexy Money." Also in 2007, she began voicing the character of Darby in the animated television show "My Friends Tigger & Pooh," and she worked on the show until 2009. In 2008, she was cast alongside Jennifer Lawrence in the drama film "The Poker House," appeared with Jessica Alba in the thriller film "The Eye," and voiced a character in the animated adventure film "Bolt."

Rising Star: By the time she was twelve years old in 2009, Moretz had become a familiar face at movie theaters and had been in nine feature films along with her work in television movies and shows. She was not yet a household name, but she soon would be. In 2009, she had a supporting role alongside Zoey Deschanel and Joseph Gordon-Levitt in the romantic dramedy "500 Days of Summer," which was a hit among critics and moviegoers. It was a huge commercial success, grossing over $60 million against a budget of just $7.5 million. She starred in the family adventure film "Jack and the Beanstalk" that same year. Her big break came with the 2010 dark comedy action film "Kick-Ass," which also starred Nicolas Cage, Aaron Johnson, and Christopher Mintz-Plasse. She played the role of an eleven-year-old vigilante named Hit-Girl, and there was controversy around her being twelve in real life and delivering profanity laden lines. However, Moretz stated in interviews that she would have been grounded if she were to say those words at home and referred to the film as "Kick-butt" instead. Certain critics pointed out that her character kills numerous people during the film, which is considered by many to be a worse moral offense than foul language. The film was successful among critics and at the box office, grossing over $96 million against a budget of $30 million. For her performance, she was nominated for a Young Artist Award, a Teen Choice Award, a Critics Choice Award, and an MTV Movie Award. She won two MTV Movie Awards, an IGN Award, and an Empire Award. She reprised her role for the equally successful 2013 sequel "Kick-Ass 2," and she starred in a remake of the 1979 horror classic "Carrie" that same year. In 2014, she played the lead character in the teen romantic drama "If I Stay," which was panned by critics but relatively successful at the box office.

Post 2016 Career: In 2016, Moretz starred alongside Seth Rogen and Zac Efron in the sequel comedy film "Neighbors 2: Sorority Rising," and she had a leading role in the biographical drama "Brain on Fire." Also in this year, she publicly announced that had dropped out of all of the films in preproduction that she did not feel personally attached to because she wanted to become more discerning in her role choices. In 2017, she starred in the crime drama film "November Criminals," and she had a leading role in the controversial Louis C. K. directed dark comedy "I Love You, Daddy." The film premiered at the Toronto Film Festival, where it received mostly negative reviews, and after allegations of sexual misconduct surfaced against the comedian director, the film's release was cancelled. In 2018, she appeared in the drama "The Miseducation of Cameron Post," which received widespread critical praise. In the same year, she starred in the thriller film "Greta" and a remake of the 1977 horror film "Suspiria." Both films received lukewarm reviews among critics. In 2019, she voiced the character of Wednesday Addams in the CGI animated film "The Addams Family."

Other Work and Personal Life: In addition to acting, Moretz has appeared on the covers of numerous fashion and lifestyle magazines, and she is often praised for her sophisticated yet age-appropriate style. She maintains a residence in Studio City, Los Angeles. Her brother, Brandon, serves as her business manager, and her other brother Trevor has been her acting coach since she received her first role. She is an outspoken feminist and LGBTQ rights activist. In 2014, she was named one of the most influential teens by Time magazine.

Real Estate: In February 2016 Chloe paid $3.4 million for a home in Studio City, California. Prior to the purchase, Chloe and her parents were renting a home in Bel-Air for a reported $10,000 per month. 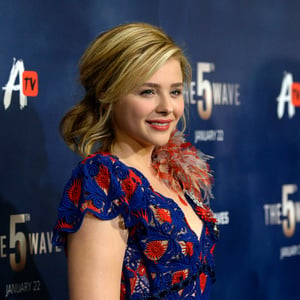