Born in Mexico City, Mexico, in 1929, Roberto Gomez Bolanos is best known by his pen name, Chespirito. He studied toward an engineering degree at the National Autonomous University of Mexico. Chespirito started writing and soon landed a job writing and appearing in comedy shows for children; his first was "Los Supergenios de la Mesa Cuadrada" in 1968.

He made some of his best-known appearances in the early '70s, including parts on the shows "El Chapulin Colorado" and "El Chavo". His other acting credits include "Los Chifalditos", "Los Chiripiojos", "El Chavo del Ocho", "La Chicharra", and "Don Calavera". Chespirito is an accomplished musical composer who has put together a number of tunes for the entertainment industry. He's composed theme songs for several native movies and telenovelas, including "La Duena" and "Alguna Vez Tendremos". 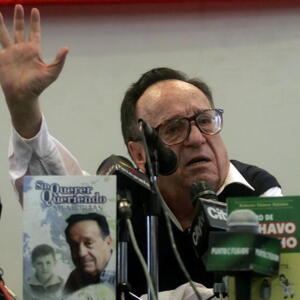