Charlotte Rampling Net Worth: Charlotte Rampling is an English actress who has a net worth of $15 million dollars. Tessa Charlotte Rampling was born in Sturmer, Essex, England in February 1946. At 17 she started her career as a model and appeared in commercials. Her first roles came in 1965 in The Knack…and How to Get It and Rotten to the Core.

Some of Rampling's better known films include Georgy Girl, Visconti's The Damned, The Night Porter, Farewell My Lovely, Woody Allen's Stardust Memories, Sidney Lumet's The Verdict, Angel Heart, Swimming Pool, The Duchess, and Fred Schepisi's The Eye of the Storm. With over 100 acting credits to her name, Rampling's first major recurring television role came in Dexter in 2013. In 2001 Charlotte was awarded Special Recognition from the Cinemanila International Film Festival for career achievement. The same year she won an honorary Cesar Award. She won a European Film Award in 2003 for Best Actress in Swimming Pool. She has been nominated for a Primetime Emmy Award and a Screen Actors Guild Award. In 2001 Rampling was made an Officer of the Order of the British Empire. In 2002 she received France's Legion of Honour. She has been married twice and became engaged to Jean-Noel Tassex in 1998. Rampling has two children and a stepdaughter. 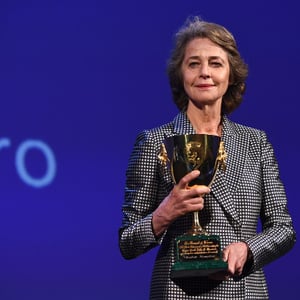