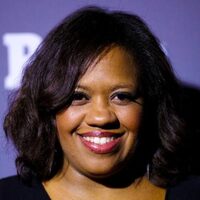 Chandra Wilson net worth: Chandra Wilson is an American actress who has a net worth of $10 million dollars. Born in Houston, Texas, Chandra Wilson graduated from New York University's Tisch School of the Arts with a BFA in Drama. She began her on-camera career with a guest-starring role on "The Cosby Show" in 1989. She then went on to appear on various television shows and in film projects. She played guest starring or recurring roles on such shows as, "Law & Order", "Third Watch", "Sex and the City", "Law & Order: Special Victims Unit", and "The Sopranos". She also appeared in such films, as "Mad Dog & Glory", "Lone Star", and "Frankie and Alice". She has received multiple acting honors, and has appeared on Broadway in "On the Town", "Avenue Q", "Caroline or Change", and "Chicago". She is most widely recognized for her Emmy-nominated performance as Dr. Miranda Bailey on "Grey's Anatomy".