Chandler Riggs Net Worth and Salary: Chandler Riggs is an American actor who has a net worth of $8 million. Riggs is probably best known for portraying the character Carl Grimes on the hit AMC series "The Walking Dead." Riggs was widely praised for his acting abilities as a result of this breakthrough role, and he won three Saturn Awards and a number of other honors and accolades.

Outside of his work on "The Walking Dead," Chandler is also known for appearing in films like "Get Low," "Mercy," "Keep Watching," and "Inherit the Viper." In addition to his acting career, Riggs has ventured into the music world as a producer. Performing under the name Eclipse, Chandler has released electronic music. Today, he maintains a recurring role in the ABC series "A Million Little Things."

Early Life: Chandler Riggs was born on June 27th of 1999 in Atlanta, Georgia. Raised alongside a younger brother, Riggs was engaged in performing arts from a very early age. Although he started acting as a young boy, he also became passionate about tap dancing and studied it for many years. His instructor was Zack Everhart, who you may remember as a "Dancing with the Stars" finalist.

Career: Chandler's acting career began at the tender age of four. Initially, he performed in various theater productions, such as "The Wizard of Oz." He later appeared in a production of "Oklahoma" hosted by Fox Theatre in Atlanta. By age five, he was starring in indie horror films like "Jesus H. Zombie." In 2009, the nine-year-old joined the casts of two feature films: "Get Low" and "The Wronged Man." Both roles helped put Riggs on the map, and his potential as an up-and-coming actor was clearly on display.

In 2010, the ten-year-old Riggs was cast as Carl Grimes in "The Walking Dead." This would prove to be a career-defining moment for his career, and it remains his best-known role. Riggs quickly became a central member of the cast, playing the son of Rick Grimes, the central character of the series. The series proved to be incredibly popular, and it achieved a number-one ranking among adults between the ages of 18 and 49.

In recognition of his contribution to the series, Chandler won a number of awards and honors. Along with the rest of the cast, he won the 2012 Satellite Award for Best Cast in a Television Series. In addition, he was nominated five times in a row for Best Performance by a Younger Actor in a Television Series, winning the Saturn Award three times. In 2014, he won a Young Artist Award.

His journey with "The Walking Dead" came to an abrupt end when his character was killed off in 2017. This proved to be a controversial decision, as it deviated from the source material in the comic book on which the series is based. That being said, Riggs would voice his iconic character once again in a special episode of "Robot Chicken" later that year. The seventh and eighth seasons received mixed reviews, unlike the other seasons of the series – which were widely praised by critics. Riggs' departure from the show was just one of many criticisms during the eighth season, and observers also complained of lackluster plot progression.

Even before he departed from "The Walking Dead," Chandler was branching out and appearing in additional film productions. One notable role came in 2014, when he joined the cast of the thriller film "Mercy." By 2017, he had also earned a credit in the horror film "Keep Watching."

Following his work on "The Walking Dead," Riggs began to explore other forms of art, including electronic music. In 2017, he started DJing his first events, and he also released a song entitled "Hold Up" under the stage name Eclipse.

After leaving "The Walking Dead," Riggs has booked roles in a number of film and television productions. In 2017, he joined the cast of "Inherit the Viper," a crime thriller movie. In 2019, he appeared in the science fiction film "Only." That year, he also returned to television work with a recurring role in "A Million Little Things" as Patrick Nelson.

Real Estate: In 2019, it was revealed that Riggs had purchased a duplex in Hollywood Hills. Situated in a quiet part of town, the duplex cost Chandler about $1.7 million. Although the residence features two separate, self-contained residences, they can be combined for use as a main house and an attached guesthouse. The smaller unit features two bedrooms, while the larger upper until features three bedrooms, hardwood floors, a fireplace, and stunning views of the surrounding canyons.

Almost immediately after he had purchased the home, it was widely reported that Riggs had been seemingly ridiculed by the official Twitter account of "The Walking Dead." After Chandler wrote "I just bought a house lol what," the Twitter handle of "The Walking Dead" replied by saying "I doubt you'll stay in it though." Although many people assumed that this was an overt insult, true fans of the series recognized it as a reference to a moment from season 2. In the story, Rick Grimes orders Carl (Chandler's character) to stay in the house, but he disobeys his father and gets into all kinds of trouble.

In 2020, it was reported that Riggs was seeking a tenant for the lower guesthouse in his duplex. The 700-square-foot property was apparently available for rent, with the price of $3,700 per month. 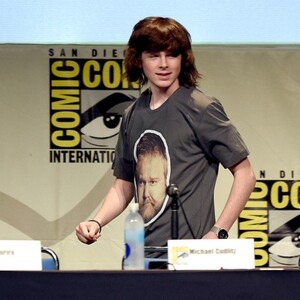