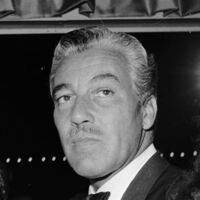 Cesar Romero net worth: Cesar Romero was an American actor, singer, dancer, and vocal artist who had a net worth equal to $5 million at the time of his death in 1994 (after adjusting for inflation). Cesar Romero was born in New York City, New York in February 1907 and passed away in January 1994. He acted for film, television, and radio and often portrayed the role of a Latin lover or a historical figure. Romero starred as The Joker on the television series Batman from 1966 to 1968 and also starred in the role in the film Batman in 1966. He had more than 200 acting credits to his name and starred as Steve McQuinn on the TV series Passport to Danger from 1954 to 1958. Romero starred as Peter Stavros on the series Falcon Crest from 1985 to 1988. He was nominated for a Golden Globe Award for Best Supporting Actor for If a Man Answers in 1963. Romero received two stars on the Hollywood Walk of Fame for Motion Picture and Television in 1960. Cesar Romero passed away on January 1, 1994 at 86 years old.