As a child she suffered from an obsessive-compulsive disorder. She attended the Central School of Speech and Drama at the University of London. Her first role came in the 1991 TV series Surgical Spirit. Tate had recurring roles on the television shows The Bill, Barking, Harry Hill, Attention Scum, Big Train, and Wild West. One of her best known roles was from 2004 to 2009 on The Catherine Tate Show. From 2006 to 2010 Tate starred as Donna Noble on the TV series Doctor Who. From 2011 to 2013 she starred as Nellie Bertram on the show The Office. She also starred as Miss Postern in the TV series Big School in 2013. She has won two British Comedy Awards, an RTS Television Award, National Television Award, TV Quick Award, and Constellation Award. Catherine has also been nominated for an International Emmy, five BAFTA TV Awards, and two Nickelodeon's UK Kids Choice Awards. She has a daughter with her former partner stage manager Twig Clark. 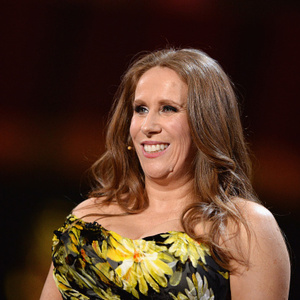