Early Life: Catherine O'Hara was born Catherine Anne O'Hara on March 4, 1954, in Toronto, Ontario, Canada. She grew up in a Catholic household with six siblings, and her sister Mary Margaret is a critically-acclaimed singer-songwriter. Catherine studied at Burnhamthorpe Collegiate Institute, where she appeared in a production of "Harvey" with future "SCTV" and "Schitt's Creek" co-star Robin Duke.

Career: O'Hara began her career as a cast member of The Second City in Toronto in 1974, and she was Gilda Radner's understudy until Gilda joined the cast of "Saturday Night Live." In 1976, The Second City created a sketch comedy television show, "SCTV," which starred Catherine and her future "Schitt's Creek" husband Eugene Levy as well as John Candy, Andrea Martin, and Harold Ramis. The show aired 135 episodes, and O'Hara also wrote for the series. She made her feature film debut in 1980's "Nothing Personal," then she appeared on "The Steve Allen Comedy Hour" (1981) and "George Burns Comedy Week" (1985). Catherine appeared in the films "After Hours" (1985) and "Heartburn" (1986), then co-starred with Michael Keaton, Winona Ryder, Alec Baldwin, and Geena Davis in Tim Burton's "Beetlejuice," which grossed $84.6 million against a $15 million budget. In 1990, she played Texie Garcia in "Dick Tracy," which brought in $162.7 million at the box office. That year Catherine also starred as Kate McCallister in "Home Alone," and she reprised her role in 1992's "Home Alone 2: Lost in New York." The two films were massive hits, with "Home Alone" grossing $476.7 million worldwide and the sequel grossing $359 million.

O'Hara guest-starred on "30 Rock" (2012) and "Modern Family" (2015), and she appeared in the 2013 comedy "A.C.O.D." with Adam Scott, Amy Poehler, and Richard Jenkins. From 2015 to 2020, Catherine starred as Moira Rose on "Schitt's Creek," which was created by her frequent co-star Eugene Levy and his son, Dan. The series aired 80 episodes over six seasons and won numerous awards, and in 2020, it swept the major comedy categories at the Primetime Emmy Awards. While starring on "Schitt's Creek," O'Hara also voiced Grandma Frump in "The Addams Family" (2019), Morgana on "Sofia the First" (2016), Aunt Tennelli on "The Magic School Bus Rides Again" (2018), and Skaelka on "The Last Kids on Earth" (2019–2020). In 2020, she competed on the game show "Who Wants to Be a Millionaire?" and won $250,000 for Upward Bound House, a Los Angeles charity that strives to "eliminate homelessness among families with children in Los Angeles by providing housing, supportive services, and advocacy."

Personal Life: Catherine married production designer Bo Welch on April 25, 1992, after meeting on the set of "Beetlejuice," and they have two sons, Matthew (born 1994) and Luke (born 1997). O'Hara holds dual citizenship between Canada and the U.S., and she bought a home in Los Angeles in the mid-1990s. Catherine's friend and "SCTV" co-star John Candy died on her 40th birthday, and she gave a eulogy at his funeral.

Awards and Nominations: O'Hara has been nominated for eight Primetime Emmy Awards, winning Outstanding Lead Actress in a Comedy Series for "Schitt's Creek" in 2020 and sharing the award for Outstanding Writing in a Variety or Music Program with her fellow "SCTV Network 90" writers in 1982. "Schitt's Creek" has also earned her a Golden Globe for Best Performance by an Actress in a Television Series – Musical or Comedy as well as awards from the ACTRA Awards, Broadcast Film Critics Association Awards, Canadian Screen Awards, Gold Derby Awards, IGN Summer Movie Awards, Online Film & Television Association, Screen Actors Guild Awards, and Television Critics Association Awards. Catherine won an American Comedy Award and Canadian Comedy Award for "Best in Show," and "For Your Consideration" earned her a National Board of Review Award and Kansas City Film Critics Circle Award. GALECA: The Society of LGBTQ Entertainment Critics honored O'Hara with Timeless Award in 2020, and she received a Legacy Award for Best Comedy Artist Female at the 2018 Legionnaires of Laughter Legacy Awards. The cast of "SCTV" was presented with an Earle Grey Award at the 1995 Gemini Awards, and Catherine has received lifetime achievement awards from the Toronto International Film Festival (2015), Canadian Screen Awards (2016), ACTRA Awards (2020), and Governor General's Performing Arts Awards (2020).

Real Estate: In 1994, Catherine and Bo paid $1.25 million for a home in the Brentwood area of Los Angeles. The 2,606 square foot home includes four bedrooms and four bathrooms, and nearby comparable homes have sold recently for $4 million. 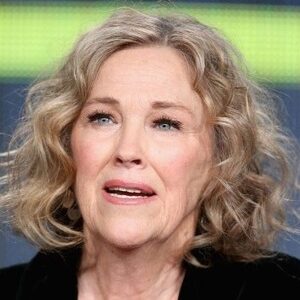