How much is Casper Van Dien Worth?

Casper Van Dien Net Worth: Casper Van Dien is an American actor who has a net worth of $7 million. Casper Van Dien is probably most well known for his role in the movie Starship Troopers. Casper Van Dien was born in Milton, Florida, in 1968 into a military family. As a child, he was often called a "Ken doll" because of his resemblance to the popular toy and his good looks. He joined the Sigma Alpha Epsilon Fraternity while attending Florida State University. His first movie appearance was uncredited in the 1984 film "Revenge of the Nerds", and Van Dien didn't appear onscreen again until a 1990 role as a life guard in the TV movie "Menu for Murder". He made brief appearances in TV shows during the '90s, including spots on "Saved by the Bell", "Dangerous Women" and "One Life to Live" before appearing in the 1997 film "Casper: A Spirited Beginning". He went on to score roles in "Beverly Hills, 90210", "James Dean: Race with Destiny", "Starship Troopers" and "Tarzan and the Lost City". Van Dien has been married twice and has two children with his first wife, Carrie Mitchum. He starred on the set of "James Dean: Race with Destiny" with Carrie Mitchum's grandfather, Robert Mitchum. Casper and Carrie split in 1997. Casper Van Dien married actress Catherine Oxenberg in 1999 after they met on the set of "The Collectors". In 2005 they appeared in their own reality show, "I Married a Princess", which lasted one season and aired on the Lifetime Network. They also appeared together in the drama "Watch Over Me" which aired on MyNetWorkTV. They have two children together. Casper and Catherine actively support the Childhelp charity which aims to end child abuse in North America. Unfortunately they divorced in 2015. In June 2018, Casper married Jennifer Wenger. 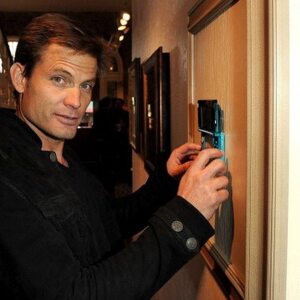