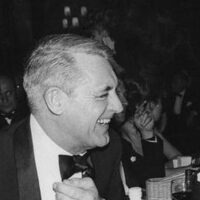 Cary Grant net worth: Cary Grant was an English actor who had a net worth of $60 million at the time of his death in 1986. That's equal to approximately $130 million after adjusting for inflation. Born in Bristol, England on January 18, 1904, Grant was best known for his accent and exceedingly good looks. He became an American citizen in 1942 and is a Hollywood staple as far as classic leading men are concerned. Also known as Archibald Alexander Leach, Grant attended Bishop Road Primary School as well as Fairfield Grammar School and became active in the entertainment industry in 1932. According to the American Film Institute, Grant was listed as second to Humphrey Bogart as Greatest Male Star of All Time. His most famous work includes the films The Awful Truth, Bringing Up Baby, Gunga Din, The Philadelphia Story, His Girl Friday, Suspicion, Arsenic and Old Lace, Notorious, The Bishop's Wife, To Catch a Thief, An Affair to Remember, North by Northwest, Charade, Penny Serenade, None But the Lonely Heart, and more. He was nominated for two Academy Awards and five Golden Globes. He received the Honorary Oscar in 1970, which was given by Frank Sinatra. He began performing on Broadway under the name Archie Leach and eventually changed his name to Cary Grant after relocating to Hollywood in 1931. He was a preferred actor by Alfred Hitchcock and appeared in at least three of his films. Grant eventually established his own production company in the 1950s and released the films Operation Petticoat, Indiscreet, That Touch of Mink, Father Goose, Charade, and Walk, Don't Run. He was the first to become a technically independent actor, not having renewed his contract, and was able to oversee everything regarding his acting career. Throughout his life he had been married five times to Virginia Cherrill, Barbara Hutton, Betsy Drake, Dyan Cannon, and Barbara Harris. Grant was known to have experimented with LSD while married to Drake. He had one daughter with Cannon by the name of Jennifer Grant, but she remained his only biological child. Harris, Grant's widowed wife, claimed that there was a gay relationship between Grant and Randolph Scott, though Jennifer Grant denies it. There have been arguments made that Grant was bisexual and that he was involved with Orry-Kelly and Scotty Bowers. Grant eventually retired from acting when he was 62 years old to focus on raising his daughter. He eventually pursued a one-man show known as A Conversation with Cary Grant, which involved him interacting with his audience. He suffered a cerebral hemorrhage while on tour on November 29, 1986.