Carol Channing net worth and salary: Carol Channing was an American singer, actress, and comedienne who had a net worth of $25 million at the time of her death in 2019. Carol Channing was born in Seattle, Washington on January 31, 1921. The family eventually moved to the San Francisco Bay Area when her father, a newspaper editor, took a new job.

Carol she attended Aptos Junior High followed by Lowell High School. She then graduated from Bennington College. She was introduced to theater when she began helping her mother distribute the Christian Science Monitor backstage while her family was living in San Francisco. She began acting professionally when she was nineteen, appearing in theater productions in New York. She made her Broadway debut soon after, in the play, "Let's Face It". However, it was her performance in the musical, "Gentleman Prefer Blondes", that caused critics to take notice. She quickly followed that role up with the performance that would make her a household name as Dolly in "Hello Dolly". She played the title role in "Hello Dolly " more then 4,500 times during her career. She won a Tony Award for her work. Over the course of her nearly 75-year career, she has won two more Tony Awards, a Grammy, and a Golden Globe. She was also nominated for an Oscar for Best Supporting Actress for her performance in the film adaptation of "Thoroughly Modern Millie". Carol Channing died on January 15, 2019 at the age of 97. She was survived by one son from her second marriage. 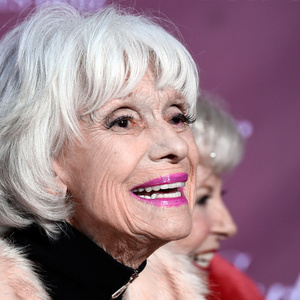