Carlton Gebbia net worth: Carlton Gebbia is a British designer and actress who has a net worth of $100 million dollars. Carlton Gebbia gained fame when she became a cast member of the Bravo reality series "The Real Housewives of Beverly Hills". Carlton joined the cast in season 4, replacing the departing housewife Marisa Zanuck.

Biography: Raised in London, England, and South Africa, Carlton Gebbia began her professional career as an actress after moving to Los Angeles at the age of 18 to pursue her dreams. She eventually went on to appear in such projects as, "Eyes of the Serpent", "Suddenly Susan", "The Young and the Restless", "Time Share", and "Pretty When You Cry".

Outside of acting and interior design, Carlton Gebbia is working on a children's book and a horror movie script. She actively supports animal causes, especially those that protect especially wild an exotic animals around Los Angeles. Her last acting role was in a movie called "Pretty When You Cry" which starred comedian Jamie Kennedy.

Carlton and David have three children; Destiny, Cross and Mysteri.

Unfortunately Carlton and David divorced in 2018.

Real Estate: When they were on the "Real Housewives" Carlton and David lived in a 12,800 square foot mansion located in Beverly Ridge Estates, an exclusive gated community in Beverly Hills. The mansion was built by Gebbia Private Estates and Carlton served as interior designer.

Religion: Carlton is a self described Wiccan which is a pagan religion that incorporates some elements of Gothic culture and witchcraft. Per her beliefs, she decorated the family's mansion in a decidedly Gothic motif. 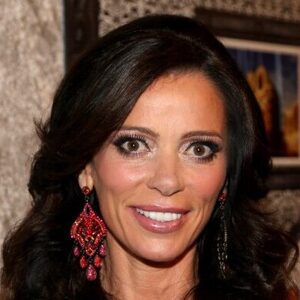