Carlos Vives Net Worth: Carlos Vives is a Colombian singer, composer and actor who has a net worth of $9 million. Carlos Alberto Vives Restrepo (best known as Carlos Vives) was born August 7, 1961 in Santa Marta, Colombia. His honorary credits include being a Grammy Award winner and seven-time Latin Grammy Award-winning Colombian artist.

Prior to graduating from Jorge Tadeo Lozano University, where he earned a publicist degree, Vives joined several bands and participated in theater as well. In 1982, he landed a role in the Colombian TV series Tiempo Sin Huella. After forming a band called La Provincia, the singer and guitarist began performing a local style known as vallenato, successfully touring his native country and South America. Upon returning to Colombia in 1991, he was offered a television role that would change his life; Vives was cast in the leading role of a fantasy series based on the life of vallenato composer Rafael Escalona, called Escalona. The new album was released in April 2013 and featured 11 tracks (out of the 40 songs written that year). The first single, Volví a Nacer, was released in September 2012 and went straight to No. 1 on Billboard charts. The second single, Como Le Gusta a Tu Cuerpo, featuring Michel Teló, was released in late January 2013. Vives also appeared on the small screen in Colombia when he joined fellow artists Ricardo Montaner, Fanny Lu, and Andrés Cepeda as a coach on Season 1 of the vocal competition series phenomenon The Voice Colombia, which premiered October 2012. Vives was married to the famous Colombian actress Margarita Rosa de Francisco, Herlinda Gómez (with whom he had 2 children) and is now married to former Miss Colombia Claudia Elena Vásquez and they have 2 children. Carlos Vives splits his time between Miami and Colombia, mainly in Santa Marta and Bogotá. 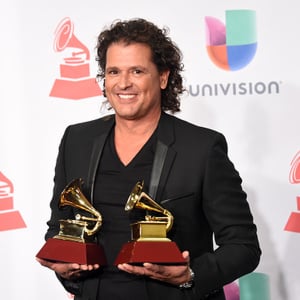