How much is Carl Reiner Worth?

Early Life: Carl Reiner was born on March 20, 1922, in the Bronx, New York City. He grew up with Jewish immigrant parents, Bessie and Irving (a watchmaker), and an older brother, Charles; Bessie was from Romania, and Irving was from Austria. As a teenager, Carl got a job repairing sewing machines, and when Charles told him about a free drama workshop, he decided to take it, and his career went in a different direction. In 1942, Reiner was drafted into the U.S. Army Air Forces, and he became a corporal while serving during World War II. Though he first trained to be a radio operator, he was later trained as a French interpreter at Georgetown University after he spent a few months in the hospital recuperating from pneumonia. At Georgetown, Carl directed a Molière play in French, and he finished his language training in 1944, then worked as a teleprinter operator in Hawaii. After seeing the Special Services entertainment unit's production of "Hamlet," he auditioned for actor/major Maurice Evans. Reiner was transferred and performed for troops in Hawaii, Iwo Jima, and Guam until 1946, when he was honorably discharged.

Career: In the late 1940s, Carl began appearing on Broadway, starring in the musicals "Inside U.S.A," "Alive and Kicking," and "Call Me Mister." In 1950, he was cast on Sid Caesar's "Your Show of Shows," which is where he met future frequent collaborator Mel Brooks. When the show ended in 1954, Reiner wrote and performed on "Caesar's Hour," which ran until 1957 and earned him two Emmys. In the early 1960s, Reiner and Brooks acted as a comedy duo on "The Steve Allen Show," introducing their "2000 Year Old Man" bit that would lead to five comedy albums, an animated special, and a Grammy. In 1961, Carl began playing Alan Brady on "The Dick Van Dyke Show," which he also wrote for. The series, originally titled "Head of the Family," was created by Reiner and based on his life, but the network didn't want him in the lead role, so they cast Dick Van Dyke and renamed the show. While working on "The Dick Van Dyke Show," Carl starred in 1963's "The Thrill of It All" (which he also wrote) and "It's a Mad, Mad, Mad, Mad World."

Personal Life: Carl married singer Estelle Lebost on December 24, 1943, and they were together until Estelle's death in 2008. The couple had three children together: famed director/screenwriter/actor Rob Reiner (born March 1947), poet/playwright Sylvia, who is better known as Annie (born May 1949), and painter Lucas (born August 1960). Though he was raised Jewish, Reiner stated in a 2013 interview that he "became an atheist after Hitler came." Carl was a Democrat, and in 2018, he said his goal was to live enough to see Donald Trump voted out of the White House. He tweeted his opposition of Trump until the day he died; some of his final tweets called Donald a "Russian-installed puppet president" and "a bankrupted and corrupt businessman."

Death and Tributes: On June 29, 2020, Reiner fell in his Beverly Hills home and lost consciousness, passing away from natural causes at the age of 98. Carl reportedly spent the last evening of his life watching TV with Mel Brooks, who had been his best friend since 1950, and was surrounded by family when he passed. After Reiner's death, many actors and comedians paid tribute to him, including Dick Van Dyke, who called Carl his idol, and Sarah Silverman, who said his "humanity was beyond compare." Steve Martin wrote an op-ed for the "New York Times" in which he called Reiner a perfect person and said that working with Carl "gave [him] a template of how to be better, nicer, how to lead with kindness."

Awards and Honors: Carl won his first Emmy in 1957 (Best Supporting Performance by an Actor for "Caesar's Hour") and followed it with 10 more wins for "The Dick Van Dyke Show," "The Sid Caesar, Imogene Coca, Carl Reiner, Howard Morris Special," and "Mad About You." In 1999, Reiner and Brooks earned a Grammy for Best Spoken Comedy Album for "The 2000 Year Old Man in the Year 2000," and the following year, Carl received the Mark Twain Prize for American Humor. Reiner also won awards from the Writers Guild of America, American Comedy Awards, Directors Guild of America, and Gold Derby Awards. He received a star on the Hollywood Walk of Fame in 1960, and he was inducted into the Television Hall of Fame in 1999. In 2017, Carl and Rob were honored with a handprint and footprint ceremony at Grauman's Chinese Theater, becoming the first father and son to receive the honor together. 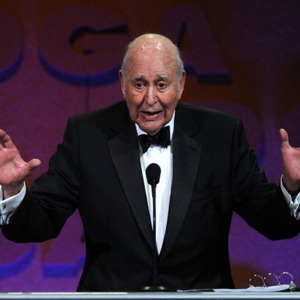