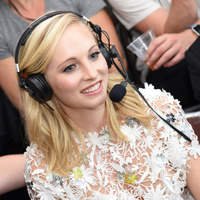 Candice Accola Net Worth and salary: Candice Accola, AKA Candice King, is an American actress, singer, and songwriter who has a net worth of $4 million dollars. Candice Rene Accola was born in Houston, Texas in May 1987. She is best known for playing Caroline Forbes on the TV show The Vampire Diaries. She was a main cast members during the show's entire run from 2009 to 2017.Her debut studio album It's Always the Innocent Ones was released independently in 2006. Her album was re-released in Japan in 2008 and had some success. She toured with Miley Cyrus as a backup singer and performed a song on The Vampire Diaries. Her first acting credit came in the 2007 film Pirate Camp. She has appeared in episodes of How I Met Your Mother, Supernatural, Greek, and Drop Dead Diva. Accola has also appeared in the movies Juno, On the Doll, X's & O's, Deadgirl, Love Hurts, Kingshighway, and The Truth About Angels. In 2012 she starred in the series Dating Rules from My Future Self as Chloe Cunningham. Her best known was Caroline Forbes on The CW's The Vampire Diaries. In 2012 Candice won a Teen Choice Award for Choice TV: Female Scene Stealer for The Vampire Diaries. She is a supporter of the It Gets Better Project. Candice became engaged to Joe King of the band The Fray in 2013. They were married in 2014. Candice delivered their first baby, a daughter, in January 2016.