Candace Bailey net worth: Candace Bailey is an American actress and television personality who has a net worth of $500 thousand. Candace Bailey is best known for being co-host on the former television program, Attack of the Show! on the G4 network. She was born in Birmingham, Alabama but moved with her family to Pensacola, Florida at the age of 2. She was former junior gymnast and joined a New York City modeling company at age 12. In 1999, Bailey made her on-screen debut on The Sopranos as character, Deena Hauser. While attending Marymount Manhattan College, Bailey got her first television presenting job on the Nickelodeon children's show U-Pick Live in 2002 and she continued to work on the show until 2005. Bailey continued to pick up different shows on Nickelodeon, hosting an episode of Slime Time Live in 2003, and co-hosting a children-oriented Super Bowl XXXVIII pre-game show in 2004. Her first role as a regular character in a fictional TV series, was on the CBS series Jericho, she played Skylar Stevens. After Jericho was cancelled, Bailey worked as a cocktail waitress and a babysitter between acting jobs. Bailey said that the work made her more appreciative of her acting opportunities. In 2010, she appeared in the fifth season of the show Ghost Whisperer, and in 2011 joined Kevin Pereira as the new co-host of Attack of the Show! until it's final episode in January of 2013. She also appeared in the music video, "Goodnight Goodnight" by Maroon 5 and had a high-profile Maxim shoot during her time with Attack of the Show!. 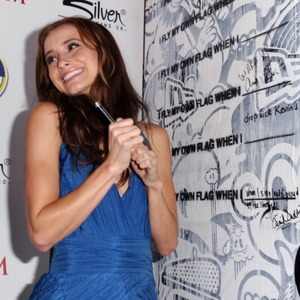