Camryn Manheim net worth and salary: Camryn Manheim is an American actress who has a net worth of $12 million. Camryn Manheim was born in Caldwell, New Jersey in March 1961. Her lengthy acting career began in 1983 when she appeared uncredited in the movie Sudden Impact. One of her best known roles came starring as Ellenor Frutt on the television series The Practice from 1997 to 2004. She appeared in 164 episodes of The Practice. Manheim starred as Della Banks on the TV series Ghost Whisperer from 2006 to 2010. She has also had recurring roles on the TV series The 10th Kingdom, The System, The L Word, Harry's Law, Extant, Person of Interest, Waco, and Living Biblically. Camryn Manheim won a Golden Globe Award in 1999 for Best Performance by an Actress in a Supporting Role in a Series, Miniseries or Motion Picture Made for Television in 1999 for The Practice. She also won a Primetime Emmy Award for The Practice in 1998.

Real estate: Camryn owns an apartment in New York City and a house in Venice, California. She purchased the Venice home in 1999 for $1.1 million. Today the house is worth north of $5 million. 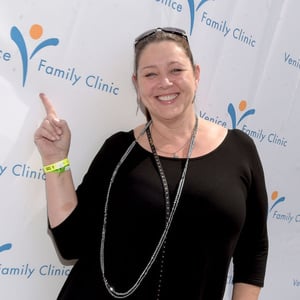