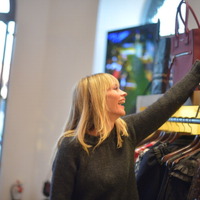 Cameron Richardson net worth: Cameron Richardson is an American actress and model who has a net worth of $2 million dollars. Cameron Richardson was born in Baton Rouge, Louisiana, and grew up in New Jersey. After graduating from high school, she moved to New York City to focus on pursuing a modeling and acting career full-time. She began her professional career as a model, appearing in such publications as Mademoiselle, Interview, Cosmopolitan, and Ocean Drive. She also appeared in ad campaigns for American Eagle Outfitters, Lucky, GAP, Roxy, Carl's Jr., and Coca-Cola, among other companies. She began her acting career in 2000, when she was cast in the lead role on the series, "Cover Me". Since then, she has appeared in such film and television projects as "Skin", "Frank McClusky, C.I.", "Supercross", "Point Pleasant", "House, M.D.", "Rise: Blood Hunter", "Entourage", "12 Miles of Bad Road", "Harper's Island", "Hotel Noir", "Last Call", "CSI: Crime Scene Investigation", and "Shameless".