Calista Flockhart Net Worth and salary: Calista Flockhart is an American actress who has a net worth of $30 million. Flockhart is perhaps best known for her television work, and she has appeared in shows like "Ally McBeal" and "Brothers & Sisters." That said, she has also been quite active in the world of film, with appearances in movies such as "A Midsummer Night's Dream" and "The Birdcage."

Throughout her career, Calista has won a number of awards and honors. These include Golden Globes and Screen Actors Guild Awards, as well as three Primetime Emmy nominations. In terms of her personal life, Flockhart is also famous for being the wife of the legendary actor Harrison Ford.

Early Life: Calista Kay Flockhart was born on November 11th of 1964 in Freeport, Illinois. Born to an English teacher and a Kraft Foods executive, Calista was raised alongside an older brother in several places. Her father's demanding work schedule as a Kraft Foods executive meant that her family was constantly relocating, and she spend time growing up in places like Illinois, Iowa, Minnesota, New Jersey, and New York.

From a very young age, Calista was interested in the performing arts. As a child, she wrote her own play and performed it one night at a dinner party. Flockhart was able to settle down in New Jersey for a prolonged period as a teen, and she attended high school dring this time. After graduating, she attended the Mason Gross School of the Arts at Rutgers University, which is also in New Jersey.

During this period, Flockhart trained under Bill Esper – a famed acting teacher and well-known expert of the Meisner technique. Esper recognized Calista's potential and allowed her to perform along with juniors and seniors, despite the fact that she was new to the program. In 1988, she graduated with a Bachelor of Fine Arts degree in Theatre. Many students never complete this arduous and competitive acting program.

Career: Shortly after graduating from her theatre program, Calista moved to New York and started attending auditions. During this period, she lived with a number of other women in a shared apartment, supporting herself with odd jobs. Her first major television role came not long after she had arrived in the Big Apple, and she booked a part in the series "Guiding Light." During these early years, Flockhart also made it onto the stages of New York in a production of "Beside Herself." Further TV roles came with series like "Naked in New York" and "Getting In."

Her first speaking role in a film came with Robert Redford's "Quiz Show." In 1994, she experienced her Broadway debut with "The Glass Menagerie." Calista won widespread critical praise for her performance, and she then joined the star-studded cast of the film "Drunks." After another appearance in "Jane Doe," Calista booked a central role in the film "The Birdcage." More Broadway roles followed, the most notable of which was probably a production of Chekhov's "Three Sisters."

In 1997, Calista's career took a major step forward when she booked the starring role in the series "Ally McBeal." This prompted her to travel to Los Angeles and commit to the series for the next few years. She earned a Golden Globe for her performances in 1998, and the show was eventually canceled in 2002. Flockhart then continued her television work with another role in "Brothers & Sisters," which debuted in 2006. The series ran for five years, and Calista's character was quite central to the overall story.

After the cancellation of "Brothers & Sisters" in 2011, Flockhart booked a role in the second season of "Full Circle" after a three-year acting hiatus. In 2015, she joined the cast of "Supergirl," playing the character Cat Grant. After filming was moved to Vancouver, Calista continued to appear sporadically on the show as a recurring character.

Outside of these notable roles, Flockhart has a number of other acting credits to her name. In 1999, she starred as Helena in the film adaptation of Shakespeare's "A Midsummer Night's Dream." She also appeared in "Things You Can Tell Just By Looking at Her" in 2000. She is also known for playing Matthew Broderick's deranged girlfriend in the 2004 film "The Last Shot."

Relationships: In 2002, Calista Flockhart and Harrison Ford began a relationship after meeting at the Golden Globe Awards. Seven years later, the pair became engaged and were married next year. Prior to her relationship with Ford, Calista adopted a son in 2001. She and her husband are now the parents of this child.

Real Estate: In 2011, Flockhart and her husband Harrison Ford purchased a home in the Brentwood neighborhood of Los Angeles for $12.65 million – about 20% less than the original listed price in 2010. The residence spans 13,767 square feet, and it features seven bedrooms, six fireplaces, and a detached cottage. The traditionally-styled property is sectioned off from the outside world by electronic gates, and the outdoor area features a swimming pool, a spa, and a large lawn.

Prior to marrying Ford, Calista Flockhart had purchased a 2,780-square-foot home in Brentwood. Located in a quiet cul-de-sac, the residence cost her about $1.4 million. She later put the 3-bedroom home on the rental market, asking $10,000 per month for any prospective tenants. In 2012, Flockhart and Ford listed another home in Brentwood for $8.295 million. Harrison had owned the property since 1977 – just after the release of the first "Star Wars" film. 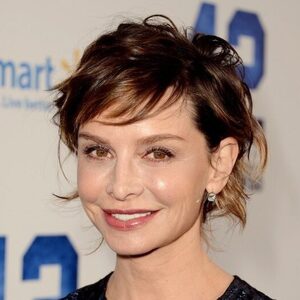