He was a lifetime member of The Actors Studio and won several Emmy Awards. Meredith was the first male actor to win the Saturn Award for Best Supporting Actor twice. He became a Captain serving in the United States Army Air Forces in World War II. Meredith had over 175 acting credits to his name. He appeared in the television series Twilight Zone from 1959 to 1963 and in the series Rawhide from 1961 to 1964. In 1965 Meredith starred as Principal Martin Woodridge in the TV series Mr. Novak. He starred as The Penguin in the Batman television series from 1966 to 1968. From 1972 to 1973 Burgess starred as V.C.R. Cameron in the television series Search Control. He starred as Dr. Willard Adams in the series Gloria from 1982 to 1983. Meredith also starred in many films including Of Mice and Men, Tom, Dick, and Harry, The Story of G.I. Joe, Batman, Rocky, The Sentinel, Rocky II, Clash of the Titans, True Confessions, Rocky III, Santa Claus: The Movie, G.I. Joe: The Movie, Rocky V, Grumpy Old Men, Camp Nowhere, and Grumpier Old Men. He was placed on the Hollywood blacklist and did not appear on screen for seven years. Burgess was awarded a star on the Hollywood Walk of Fame in 1987 at 6904 Hollywood Blvd. he was also inducted into the American Theater Hall of Fame. Burgess Meredith passed away on September 9, 1997 at the age of 89. 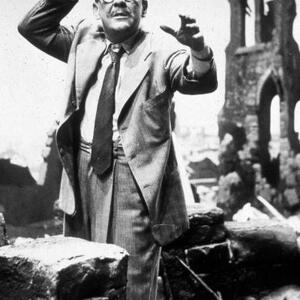