Bud Spencer Net Worth: Bud Spencer is an Italian actor, filmmaker and former professional swimmer who has a net worth of $500 thousand. Born Carlo Pedersoli on October 31, 1929 in Naples, Italy, he starred in many spaghetti Westerns and action-packed movies during the '60s and '70s. He was also the first Italian to swim the 100-meter freestyle in less than a minute and competed as a swimmer on the Italian National Team at the Olympic Summer games in both Helsinki, Finland (1952) and Melbourne, Australia, (1956).

He was also an Olympic-class water polo player. Though he became an attorney, he was bitten by the acting bug and appeared as a member of the Praetorian Guard in his first movie, MGM's epic Quo Vadis (1951), shot in Italy in 1951. During the '50s and first half of the '60s he appeared in films made for the Italian market, but his career didn't really get wings until he started performing under the name Bud Spencer in 1967, as a tribute to Spencer Tracy and to the American beer Budweiser. Spencer achieved his greatest success in spaghetti Westerns. He teamed up with fellow Italian Terence Hill and the two made such international hits as Ace High (1968) and They Call Me Trinity (1970). Spencer made 18 movies with Hill. After 1983 Spencer's movie career slowed down, though he did experience much success in the early '90s with the TV action-drama series Extralarge. Spencer also wrote screenplays and has registered several patents in his time. In 2005 Spencer entered politics, standing as regional councillor in Lazio for the center-right Forza Italia party. 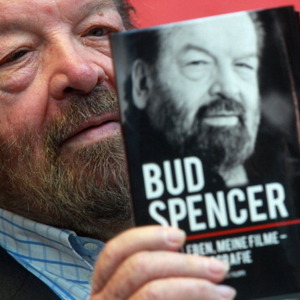