She was born in 1995 in Duque de Caxias, Rio de Janeiro and started acting when she was very young. Over the years, she has starred in several Brazilian television shows, short-films and soap operas starting in 1999 when she was only four years old. Throughout her career, she has appeared in eighteen television shows, five films, and has also done some work in theatre. Her relationship with Neymar has had its fair share of ups and downs. The couple dated in 2013 and broke up a year later. During preparation for the 2014 World Cup Championship in Brazil, the couple was seen together again, and all signs point to a rekindled relationship. After reports surfaced about Neymar finding a new partner, Gabriella Lenzi, a 20-year-old model, it was recently revealed that Neymar is indeed back together with his first love, Bruna. Neymar and Bruna's reunion was confirmed in June when the Barcelona forward's girlfriend attended Brazil training to watch on the sidelines. 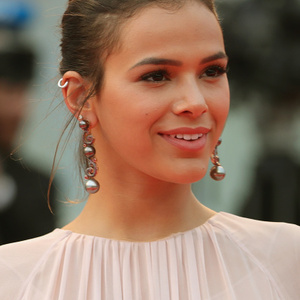