How much is Bruce Greenwood Worth?

Bruce Greenwood net worth: Bruce Greenwood is a Canadian actor and musician who has a net worth of $10 million dollars. Stuart Bruce Greenwood was born in Rouyn-Noranda, Quebec, Canada in August 1956. His first appearance came in the TV series The Beachcombers in 1977 and 1978. Greenwood's film debut came in the 1979 movie Bear Island. Bruce starred as Dr. Seth Griffin the TV series St. Elsewhere from 1986 to 1988. From 1991 to 1992 he starred as Pierce Lawton on the series Knots Landing. Greenwood starred as Thomas Veil in the series Nowhere Man from 1995 to 1996. In 2012 he played Dr. Emmett Cole on the TV series The River. He provided the voice of Batman and Bruce Wayne in the TV series Young Justice from 2010 to 2013. Greenwood has starred in the films Wild Orchid, The Servants of Twilight, Passenger 57, Exotica, Father's Day, Thick as Thieves, The Sweet Hereafter, Double Jeopardy, The Soul Collector, Here on Earth, Cord, Thirteen Days, Ararat, Swept Away, Below, The Core, I, Robot, Being Julia, Racing Stripes, Capote, Eight Below, Déjà vu, I'm Not There, National Treasure: Book of Secrets, Star Trek, Dinner for Schmucks, Super 8, Flight, The Place Beyond the Pines, Star Trek Into Darkness, and Endless Love. He has won a Gemini Award, Independent Spirit Award, and Satellite Award, and been nominated for a Screen Actors Guild Award. Bruce married Susan Devlin in 1985. 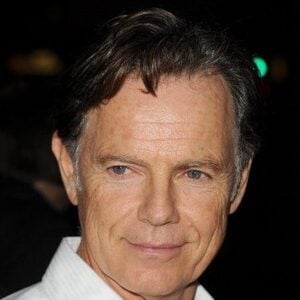