Bruce Campbell net worth and salary: Bruce Campbell is an American actor, director, and writer who has a net worth of $10 million. Bruce Campbell is known for his roles in such cult films as "Crimewave," "Maniac Cop," and Sam Raimi's "Evil Dead" franchise. On television, he starred in "The Adventures of Brisco County, Jr.," "Jack of All Trades," and "Burn Notice." Among Campbell's other credits are the television sitcom "Ellen" and the movies "The Hudsucker Proxy," "Timequest," "Bubba Ho-Tep," and "Sky High."

Early Life and Education: Bruce Campbell was born in 1958 in Royal Oak, Michigan. His mother, Joanne, was a homemaker, while his father, Charles, had a decades-long career in advertising. Campbell is of English and Scottish descent, and has two siblings: an older brother named Don and an older half-brother named Michael. As a teenager, Campbell attended Wylie E. Groves High School, where he met and befriended future filmmaker Sam Raimi. Together, the two started making short movies. For his higher education, Campbell went to Western Michigan University.

"The Evil Dead": In 1981, Campbell had his breakthrough role starring as Ash Williams in Sam Raimi's "The Evil Dead." Endorsed by author Stephen King, the supernatural horror film eventually became the number one movie in the UK, and later developed a reputation as a major cult film. Moreover, it spawned a whole franchise, including two direct sequels, a soft reboot, a television series, and comic books and video games. The first sequel, "Evil Dead II," was released in 1987. Like the first film, it acquired a significant cult following. A second sequel, "Army of Darkness," came out in 1992, and also became a cult favorite. Later, in 2013, director Fede Álvarez rebooted the series with his film "Evil Dead." A follow-up television series called "Ash vs Evil Dead" subsequently debuted in 2015; it ran for three seasons, before being cancelled in 2018.

Further Film Career: After the first "Evil Dead" film, Campbell starred in the independent drama "Going Back." He then re-teamed with Sam Raimi for the comedy horror film "Crimewave," and starred in the action slasher film "Maniac Cop." In the early 90s, Campbell reprised his role in the sequel "Maniac Cop 2," and had a cameo appearance in Raimi's superhero film "Darkman." Among his other credits in the 90s were the comedy romance "Lunatics: A Love Story"; the science-fiction horror film "Mindwarp"; the Coen brothers' period comedy "The Hudsucker Proxy"; John Carpenter's post-apocalyptic action film "Escape from L.A."; the science-fiction thriller "Menno's Mind"; and the comedy "The Ice Rink." 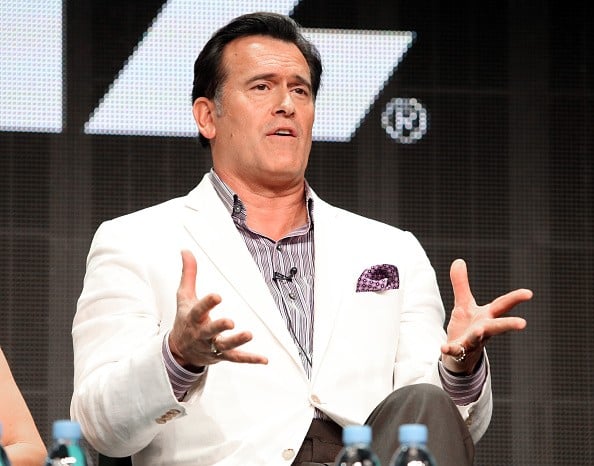 Campbell kicked off the 2000s with roles in the action film "Icebreaker" and the science-fiction film "Timequest." He then made cameo appearances in "The Majestic" and Sam Raimi's first "Spider-Man" movie. In 2002, he had a significant leading role in the comedy horror film "Bubba Ho-Tep," playing Elvis Presley. A few years later, Campbell made his feature film directorial debut with "Man with the Screaming Brain," a science-fiction slapstick comedy that he also produced, co-wrote, and starred in. This was followed by parts in "Sky High," "The Woods," and the animated films "The Ant Bully" and "Aqua Teen Hunger Force Colon Movie Film for Theaters." Campbell's later credits include "My Name is Bruce," which he also directed and produced; the animated films "Cloudy with a Chance of Meatballs" and "Cars 2"; the romantic comedy "The Escort"; and the science-fiction comedy "Black Friday!"

Television Career: On the small screen, Campbell starred in the science-fiction comedy Western "The Adventures of Brisco County, Jr.," which ran from 1993 to 1994. He played a lawyer turned bounty hunter who tries to find the man who killed his father. After this, he had a recurring role as Greek mythological figure Autolycus on both "Hercules: The Legendary Journeys" and "Xena: Warrior Princess." He also directed multiple episodes of both shows, including the "Hercules" series finale. Among Campbell's other notable credits in the 90s were "Lois & Clark: The New Adventures of Superman" and the sitcom "Ellen," on which he had recurring roles.

In 2000, Campbell starred in the action comedy series "Jack of All Trades," which took place on a fictional island in the early 19th century. This was followed by appearances in such shows as "Beggars and Choosers," "The Legend of Tarzan," and "Charmed." Additionally, Campbell lent his voice to numerous animated programs, including "Duck Dodgers," "My Life as a Teenage Robot," "Megas XLR," "Robot Chicken," and "The Replacements." In 2007, he landed his biggest television role yet on the series "Burn Notice," playing beer-chugging former Navy SEAL Sam Axe. Campbell's later television credits have included appearances on "1600 Penn," "Psych," "Fargo," and "Lodge 49." In 2019, he was also the host of "Ripley's Believe it or Not!"

Writing Career: As an author, Campbell has penned a number of works. His writing debut was a 2001 autobiography entitled "If Chins Could Kill: Confessions of a B Movie Actor." This was followed by "Make Love! The Bruce Campbell Way," a novel written in the first person. Additionally, Campbell wrote a sequel autobiography called "Hail to the Chin: Further Confessions of a B Movie Actor," and penned an issue of the comic series "The Hire."

Personal Life: In 1983, Campbell married his first wife, Christine Deveau. They had two children, and divorced in 1989. Subsequently, Campbell wed costume designer Ida Gearon, whom he met on the set of the film "Mindwarp." They live in Jacksonville, Oregon. 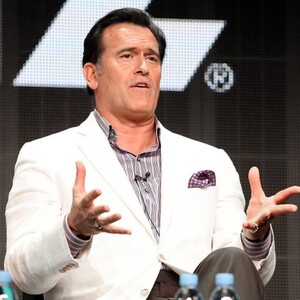