Brittany Snow Net Worth and salary: Brittany Snow is an American actress and singer who has a net worth of $9 million dollars. Born in Tampa, Florida, in 1986, Brittany Snow started her entertainment career as a model when she was three years old. As a teen, Snow landed a recurring part as Susan Lemay on "Guiding Light" before earning a starring role on "American Dreams" on NBC. Snow was nominated for a Young Artist Award and several Teen Choice awards for her three-year performance as Meg Pryor on the series. Snow had a small part on "Nip/Tuck" before making her film debut alongside Vin Diesel in "The Pacifier" in 2005. She upped her star with a part in teen comedy "John Tucker Must Die" before scoring the role of Amber Von Tussle in the movie adaptation of "Hairspray". Snow won a Hollywood Film Festival Award for Ensemble of the Year for the performance. Snow also had a part in the box office hit "Pitch Perfect" in 2012 with Anna Kendrick. She went on to appear in Pitch Perfect 2 and 3, in 2015 and 2017, respectively.

Other TV and film credits include "Prom Night", "The Vicious Kind", "Black Water Transit", "96 Minutes", "Law & Order: Special Victims Unit", "Family Guy", "Gossip Girl", "Ben and Kate" and "To My Future Assistant". Snow has appeared in nearly a dozen music videos, including Ashley Tisdale's "It's Alright, It's OK" and "The Phrase That Pays" for "The Academy Is…". Snow has musical credits on two soundtracks: "Hairspray" in 2007 and "Pitch Perfect" in 2012.

In February 2019 Brittany became engaged to realtor Tyler Stanaland. They married in 2020.

Real Estate: In August 2020 Brittany listed a home in Studio City, California for $2.8 million. She paid $2.2 million for the home several years earlier. Not surprisingly, her husband was the listing agent. She continues to own a condo in LA which she bought in 2005 for $960,000. 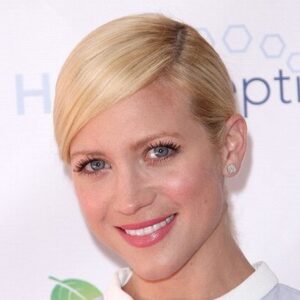