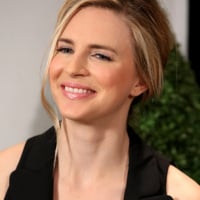 Brit Marling net worth: Brit Marling is an American actress, screenwriter, and film producer who has a net worth of $4 million. Brit Marling was born in Chicago, Illinois in August 1982. As an actress she starred as Liz Garvey in the TV mini-series Babylon in 2014 and as Prairie Johnson in the TV series The OA in 2016. Marling has also starred in the films Political Disasters, Sound of My Voice, Another Earth, Arbitrage, The Company You Keep, The East, The Better Angels, The Keeping Room, and Posthumous. She also created the television series The OA which she wrote and executive producer. Marling also wrote and produced the films Sound of My Voice, Another Earth, and The East. She has been nominated for four Independent Spirit Awards and two Saturn Awards.