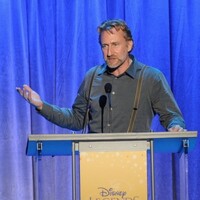 Brian Henson net worth: Brian Henson is an American puppeteer, director and producer who has a net worth of $150 million. He is the Chairman of The Jim Henson Company and is the son of puppeteers Jim Henson and Jane Henson.

Early Life: Brian Henson was born on November 3, 1963 in New York City. He was the third child and first born son of Jane and Jim Henson. Jane and Jim had five children, three girls and two boys.

As a kid he made a handful of cameos in some of the first versions of PBS' "Sesame Street". In 1980, during a summer break from high school, he worked as a production assistant on the movie "The Great Muppet Caper". He actually helped create and operate the device that enabled the Muppets to ride bikes.

Career: During the 1980's he performed as a puppeteer on various movies, including for Jack Pumpkinhead in "Return to Oz". He was the principal performer for the puppet Audrey II in "Little Shop of Horrors". He also worked as Hoggle, one of the main characters in his father's film "Labyrinth", and the Dog in both versions of "The Storyteller".

Henson also operated special effects for the film "Santa Claus: The Movie", which was not a Jim Henson project and allowed the younger Henson to develop a name outside his father's world.

Brian Henson is the co-creator, producer and a performer in the off Broadway variety show "Stuffed and Unstrung" and also played various characters on "The Puppet Game Show".

Death of Jim Henson: Jim Henson died on May 16, 1990 at the age of 53. A year before his death, Jim had been exploring a possible sale of his production studio and assets to The Walt Disney Company. The deal was reportedly valued at $150 million and included a lucrative 15-year contract for Jim's creative services. After adjusting for inflation, $150 million in 1990 is the same as $300 million today. The deal would NOT have included the rights to the Sesame Street characters, which Jim owned personally. Jim owned the characters but split merchandising revenue with the Children's Television Workshop, the nonprofit that produced Sesame Street (which was later renamed Sesame Workshop).

Upon his death, control of The Jim Henson Company passed in equal parts to his five children. The Disney negotiations were canceled by December 1990 after family members and Disney could not come to terms.

In 2000 the family sold the company to EM.TV & Merchandising AG, a German entertainment/media conglomerate, for $680 million.

Within a year, EM.TV's stock had collapsed and the Henson family was able to re-acquire their assets in 2003 for just $83 million.

While under EM.TV's ownership, the rights to the Sesame Street Muppets were sold to Sesame Workshop, the nonprofit that produces several Sesame Street-related productions.

In 2004, the family sold the rights to the Muppets to Walt Disney for a reported $200 million. Disney subsequently created The Muppets Studio. With the deal, the word "Muppet" became a legal trademark of Walt Disney, though Sesame Workshop is allowed to use the term thanks to a separate arrangement with Disney.

Personal Life: Henson has been married to actress, Mia Sara since 2010 and they have a daughter named Amelia Jane Henson. Mia has a son from a previous marriage to Jason Connery, son of actor Sean Connery.

Real Estate: Brian and Mia own several homes around the world. Their most notable properties are a custom-built mansion in the Hollywood Hills and a New York City penthouse. Their Hollywood Hills house was custom built by the couple in an extremely modern version of Irish castles they visited on vacations.

The couple owns a second Los Angeles home in the neighborhood of Los Feliz. This property came up for rent in June 2020 for $20,000 per month.