Bresha Webb Net Worth: Bresha Webb is an American actress who has a net worth of $300 thousand dollars. Bresha Webb was born in Baltimore, Maryland in July 1987. Bresha graduated from the Baltimore School For The Arts. Her first acting roles acme in 2007 in the short Zombie Love and the TV series State of Mind, K-Ville, and Lincoln Heights. From 2008 to 2009 she starred in the TV series ER as Laverne St. John. In 2013 Webb starred as Cookie in the television series LearningTown. Since 2010 she has starred as Imunique in the series Love That Girl!. She has also starred as Teresa Morris in Grey's Anatomy in 2014. Bresha has starred in the films The American Mall, Return to Zero and At the Devil's Door. She has also appeared on the TV shows Private Practice, Raising the Bar, Hung, In the Flow with Affion Crockett, Bandwagon: The Series, King Bachelor's Pad, and Weeds. She was featured on a Saturday Night Live special showcase featuring African American female comedians. 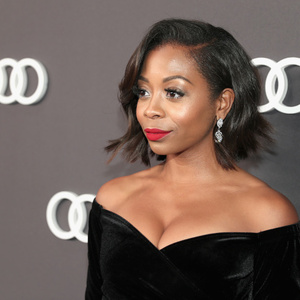