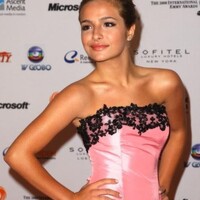 Brenda Asnicar net worth: Brenda Asnicar is an Argentine actress, dancer, and singer who has a net worth of $5 million. Brenda Asnicar was born in San Isidro, Buenos Aires, Argentina in October 1991. She is best known for starring as Antonella Lamas Bernardi in the telenovela Patito Feo. Asnicar has starred as Juana Carbajal in the television series Cumbia Ninja since 2013. From 2011 to 2012 she starred as Keira Beltran in the series Los unicos. Asnicar has been nominated for a Clarin Entertainment Award and a Premios Martin Fierro award for Patito Feo. She started out her career as a member of the choir Cantaninos and made her first recording "Caminos" in 2006. Brenda has been romantically linked to soccer player Carlos Tevez.