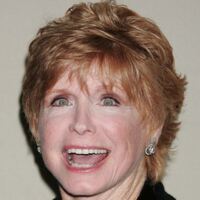 Bonnie Franklin net worth: Bonnie Franklin was an American actress who had a net worth of $1 million. Bonnie Franklin was born in Santa Monica, California in January 144 and passed away in March 2013. She was best known for playing the role of Ann Romano in the soap opera One Day at a Time. Franklin starred as Ann Romano in One Day at a Time from 1975 to 1984. In 2012 she starred as Sister Celeste in the soap opera The Young and the Restless. Franklin also appeared in episodes of the TV series Cavalcade of America, Mr. Novak, Profiles in Courage, Karen, The Man from U.N.C.L.E., Hazel, Gidget, Please Don't Eat the Daisies, The Munsters, The Love Boat, Hearts are Wild, Burke's Law, Almost Perfect, Touched by an Angel, and Hot in Cleveland. Franklin was nominated for two Golden Globe Awards, a Primetime Emmy Award, and two TV Land Awards for One Day at a Time. Bonnie Franklin passed away on March 1, 2013 at the age of 69 from complications of pancreatic cancer.