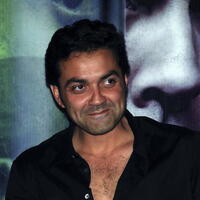 Bobby Deol net worth and salary: Bobby Deol is an Indian actor who has a net worth of $8 million. Bobby Deol was born in Mumbai, Maharashtra, India in January 1969. He works in Hindi films and has been nominated for a Filmfare Award and a Filmfare Best Actor Award. Bobby Deol is the son of Dharmendra Deol and his stepmother is Hema Malini. As a child actor he papered in the 1977 film Dharam Veer. As an adult, Bobby Deol made his acting debut in the 1995 movie Barsaat. He has starred in several other films including Gupt in 1997, Soldier in 1998, Badai in 2000, Bichhoo in 2000, Ajnabee in 2001, Humraaz in 2002, Apne in 2007, Yamla Pagla Deewana in 2011, Kareeb in 1998, and Dillagi in 1999. Bobby Deol won a Filmfare Award for Best Debut Actor in 1996 for Barsaat and won a Screen Award for Most Promising Debut Actor in 1996 for Barsaat.