Bob Mortimer net worth: Bob Mortimer is an English comedian, actor, and writer who has a net worth of $5 million. Bob Mortimer was born in Acklam, Midlesbrough, North Riding of Yorkshire, England in May 1959. He is best known for his double act with Vic Reeves as Vic and Bob.

Mortimer co-owns the independent production company Pett Productions. He has starred in the TV series Vic Reeves Big Night Out, The Smell of Reeves and Mortimer, Randall & Hopkirk (Deceased), Popetown, Vic & Bob's Afternoon Delights, House of Fools, and Drifters. In 2012 Bob Mortimer and Vic Reeves won a British Comedy Award. Mortimer took over for Rik Mayall, who passed away, as the mascot of Well's Bombardier Beer, Bombardier Bedford, in 2015. In October 2015 it was revealed that he was recovering from a triple bypass surgery. This led to the first leg of Reeves and Mortimer's 25 years tour being cancelled. 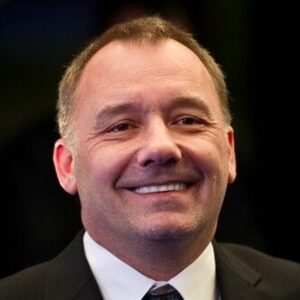