In 2002, Derek published her memoir, "Riding Lessons: Everything That Matters in Life I Learned from Horses," and in 2020, she made a documentary, "Bo Derek: In My Own Words," for the Reelz channel. In 2000, Bo launched Bo Derek Pet Care, which sells shampoo, conditioner, and face wash for dogs, and a portion of the company's profits are donated to charitable organizations that support retired military dogs.

Early Life: Bo Derek was born Mary Cathleen Collins on November 20, 1956, in Long Beach, California. She grew up with mother Norma (a hairdresser/make-up artist), father Paul (a Hobie Cat executive), two younger sisters, and a younger brother. After divorcing in 1969, Norma married stunt performer Bobby Bass. Collins studied at Harbor City's George S. Patton Continuation School and Narbonne High School but dropped out at age 16 to film a movie in Greece with John Derek ("Fantasies," which wasn't released until 1981).She fell in love with John, who was 30 years older than her and married to actress Linda Evans, and they moved to Germany to avoid the U.S.'s statutory rape laws. They returned to the U.S. when Collins was 18, and she started going by the name Bo Derek after marrying John in 1976.

Career: Though "Fantasies" was Derek's film debut, her first movie to be released was 1977's "Orca." In 1979, she was cast in the role of Jenny Hanley in Blake Edwards' "10," reportedly beating out Melanie Griffith, Kim Basinger, and Christie Brinkley. Bo co-starred with Dudley Moore and Julie Andrews in the film and received a Golden Globe nomination for her performance. The film was a hit with both critics and audiences, earning $74.8 million at the box office. Derek's next film was 1980's "A Change of Seasons," which also starred Anthony Hopkins and Shirley MacLaine. That year, Bo was featured in "Playboy" twice, and she also appeared in the magazine in 1981, 1984, and 1994. She then played Jane to Miles O'Keeffe's Tarzan in her husband's "Tarzan, the Ape Man" and starred in 1984's "Bolero," which was also directed by John. Bo and John's final film collaboration was 1989's "Ghosts Can't Do It," and that year she also guest-starred on an episode of "D.C. Follies" entitled "Nixon Has Romantic Fantasies About Bo Derek."

Personal Life: Bo married John Derek on June 10, 1976, and the couple stayed together until John died of heart failure in May 1998. Bo was stepmother to John's children, Russell and Sean, who were both born before she was. In a 2020 interview with "Variety," she said that "being part of breaking up a marriage is a horrible thing and I still can't believe I was a part of it." Derek began a relationship with actor John Corbett after meeting on a blind date in 2002, and they live on a Santa Ynez ranch with several dogs and horses.

A member of the California Horse Racing Board, Bo has loved riding horses since childhood and has served as a spokesperson for the Animal Welfare Institute's campaign to enact legislation to end horse slaughter. She is also an ambassador for WildAid. Derek was named an honorary Green Beret by the Special Forces Association, and Veterans Affairs' National Rehabilitation Special Events named her an honorary chairperson in 2001. An independent, Bo has supported George H. W. Bush, George W. Bush, Barack Obama, and Mitt Romney in presidential elections and appeared at the Republican National Convention in 2000 and 2004. In 2006, President George W. Bush appointed Derek to the John F. Kennedy Center for the Performing Arts' board of trustees.

Awards and Nominations: In 1980, Derek earned a Golden Globe nomination for New Star of the Year in a Motion Picture – Female for "10." She also received Jupiter Award nominations for Best International Actress for "10" in 1980 and "Tarzan the Ape Man" in 1982. In 2018, Bo received the Helen Woodward Animal Center's Humane Award for her "great dedication to animal welfare." 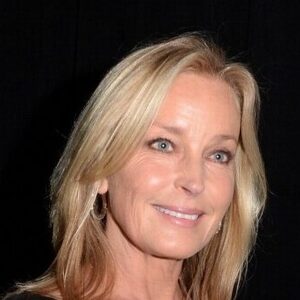