BJ Novak Net Worth: BJ Novak is an American actor, stand-up comedian, screenwriter, and director who has a net worth of $10 million. Novak is probably best known for playing the role of Ryan Howard on the monumentally popular TV series "The Office." He was also a writer/producer on the show. Outside of this career-defining role, Novak has also appeared in a number of additional film and television products. These include "Saving Mr. Banks" and "The Founder." In addition, he gained a degree of notoriety for appearing in the Quentin Tarantino World War II film "Inglorious Basterds," playing the role of PFC Smithson.

Early Life: Benjamin Joseph Manaly Novak was born on July 31st of 1979 in Newton, Massachusetts. Raised in a Jewish family, Novak was inspired to become a writer at an early age by his father, author William Novak. William is known for co-editing "The Big Book of Jewish Humor," and he also ghostwrote memoirs for Nancy Reagan and many other famous figures. His parents are also savvy entrepreneurs, and they co-created a Jewish matchmaking service.

BJ grew up alongside two brothers, one of which became a composer. While attending elementary and middle school, he attended a Jewish summer camp in New England. While attending high school, he met future co-star of "The Office" John Krasinski for the first time. The pair became friends and co-wrote a satirical play together. During his high school years, Novak also edited one of the school's newspapers.

After graduating in 1997, BJ attended Harvard. During this period, he majored in English and Spanish literature. He also became a member of the "Harvard Lampoon" and the Hasty Pudding Club. After staging a variety show with a fellow student and writing his honors thesis on the films of Shakespeare's "Hamlet," Novak graduated in 2001.

Career: After leaving Harvard, BJ immediately relocated to Los Angeles and started performing as a stand-up comedian. He appeared in clubs across the area, and his first performance was at a youth hostel in Hollywood. Two years after starting his career as a comedian, Novak was considered one of the industry's most promising young talents.

His first venture into television work came in 2002 when he accepted a position as a writer for the WB sitcom "Raising Dad." Unfortunately, the show was quickly canceled after one season. Continuing onwards, Novak started appearing on shows like "Premium Blend" and "Late Night with Conan O'Brien," showing off his comedy routines in the process.

Funnily enough, Novak's first real acting gig came with MTV's "Punk'd." He became known as one of the most common pranksters utilized by host Ashton Kutcher, and he "punk'd" celebrities like Hilary Duff, Rachael Leigh Cook, Usher, and many others.

Of course, Novak's career truly got started after he booked his breakout role in "The Office." BJ was spotted by producer Greg Daniels while he was performing a stand-up comedy routine. After being cast as Ryan Howard, Novak started his journey with "The Office" as a temporary employee. Over the years, he started to play a more prominent role, eventually developing a notable on-screen relationship with Mindy Kaling's character.

Like many of the cast members, Novak also played a valuable role behind the camera. Throughout the show's run, he served as a producer and writer. In fact, he was one of the original writers for the show, alongside figures like Mindy Kaling, Michael Schur, and Paul Lieberstein. He ended up writing 15 episodes of "The Office," which included well-known fan-favorites such as "Diversity Day."

Novak eventually signed a new contract that would keep him on the show for the seventh and eighth seasons. During this period, he started acting as an executive producer. He also directed a few of the episodes for the first. Despite leaving the show after the ninth-season premiere, he returned for the final episode of the series. As a result of his contributions to the show, Novak was honored with five consecutive Primetime Emmy nominations for Outstanding Comedy Series. 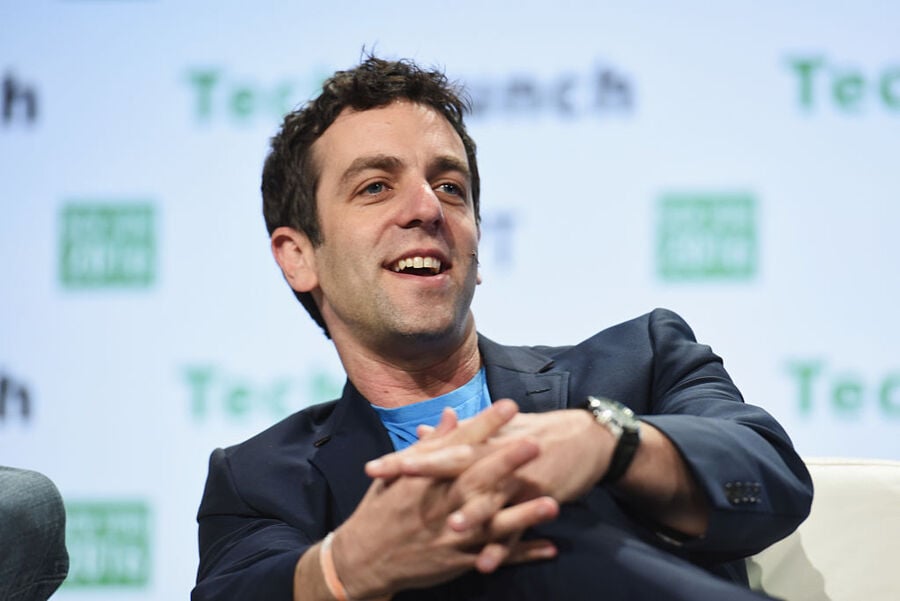 After leaving "The Office," Novak's career has advanced with a fair amount of momentum. In 2009, he joined the cast of Quentin Tarantino's "Inglorious Basterds." Further roles of note came with movies like "Saving Mr. Banks" and "The Founder." In addition, BJ Novak made appearances in films like "Unaccompanied Minors," "Knocked Up," "Reign Over Me," "The Internship," and "The Amazing Spider-Man 2." In 2011, Novak established himself as a voice actor, playing the role of Bake Smurf in "The Smurfs." He later reprised his role in "The Smurfs 2," which was released in 2013.

In terms of television, he has appeared in shows like "The Mindy Project," "The Newsroom," "Community," and "Crazy Ex-Girlfriend." As well as his acting role, he assisted with "The Mindy Project" by acting as a consulting producer. In 2020, filming began for Novak's new film called "Vengeance." Aside from starring in this project and writing the script, BJ will also direct the film. Unfortunately, filming was put on hold due to the Covid-19 pandemic in 2020. Further upcoming TV projects include "Young People" and "Platform," which he will be writing, directing, and producing.

Other Ventures: Outside of acting and writing, BJ Novak has published a number of successful books. In 2013 he signed what was reported as a "seven-figure", two-book deal with publishing company Knopf. His first book, a collection of stories, was released in 2014. He later released a children's book. Both of these books have become bestsellers, one started on the NY Times Best Seller list for 174 weeks. Novak also created an Apple iOS app in 2015 called The List App. Unfortunately, the app was shut down in 2017 due to its lack of popularity.

In May 2015 it was reported that Novak and Kaling co-signed a $7.5 million deal to write a book about their friendship and former relationship.

Relationships: BJ Novak is perhaps best known for his "on-and-off" relationship with Mindy Kaling, his co-star on "The Office." The relationship seemed to mimic the on-screen romance shared by their two characters in the TV series. The two are still very close, despite having ended their relationship. Novak is the godfather of two of Kaling's children. 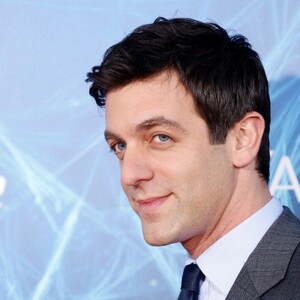