Early Life: William December "Billy Dee" Williams Jr. was born on April 6, 1937 in New York City, the son of Loretta Anne and William December Williams Sr. He and his twin sister Loretta were primarily raised by their grandmother while their parents worked several jobs. His mother had trained as an opera singer and the family was richly cultured, with the children exposed early on to theater, art, and similar creative experiences. Williams graduated in 1955 from the LaGuardia High School of Music & Performing Arts, where he had majored in arts with a focus on visual arts. He got a two-year scholarship for the National Academy of Fine Arts and Design in New York and studied with a focus on classical principles of painting. He was nominated at 19 for a Guggenheim Fellowship grant and won a Hallgarten Prize in the mid '50s. He later studied at the Harlem Actors Workshop where he studied under Sidney Poitier.

Stage and Film Career: Billy Dee Williams' show business career began as a stage actor, making his debut at age seven in the 1945 production of "The Firebrand of Florence." His first big Broadway theatre break was the play "A Taste of Honey." He's returned to the stage sporadically over the years in plays like "I Have a Dream" and "Fences." Williams made his film debut in 1959's "The Last Angry Man." His breakout role, however, was on TV, when he played Chicago Bear Gale Sayers in the popular TV movie "Brian's Song", in 1971. Williams was nominated for an Emmy for Best Actor for his performance. His success with Brian's Song earned him a seven-year contract with Motown's Berry Gordy. A year later he starred opposite Diana Ross in the Billie Holiday biopic "Lady Sings the Blues." Three years later and Williams had become one of the most well known Black actors in America.

It was in 1980 when Billy Dee Williams appeared in what is arguably his most famous role, that of Lando Calrissian in the "Star Wars" film franchise. His first appearances came in 1980's second Star Wars movie, "The Empire Strikes Back." He returned as Lando in 1983's "Return of the Jedi" and 2019's "The Rise of Skywalker." Between "The Empire Strikes Back" and "Return of the Jedi," he starred alongside Sylvester Stallone in 1981's thriller "Nighthawks."

One of the other biggest movies on his resume, "Batman," was supposed to have been part of a much larger role for Williams. In it, he appears as Gotham City district attorney Harvey Dent, a character who goes on to eventually become the supercriminal Two-Face. However, it wasn't to be, and Tommy Lee Jones was cast in the part instead in the sequel "Batman Forever." Williams eventually voiced Two-Face" in the 2017 film "The Lego Batman Movie."

TV Career: William's TV work included a recurring guest-starring role on "Gideon's Crossing." In the 1984-1985 season of "Dynasty," he played Brady Lloyd. He was paired with actress Marla Gibbs in three sitcoms: "The Jeffersons," "227," and "The Hughleys." In 1992, Williams portrayed Berry Gordy  in "The Jacksons: An American Dream." In 1993, Williams made a guest appearance on the spin-off to "The Cosby Show, A Different World." Williams also appeared as himself on "Martin." In 1990, Williams made a special guest appearance on the sketch comedy show "In Living Color." In "That '70s Show," Williams portrayed Pastor Dan. He also appeared in "Scrubs," "General Hospital," "Titan Maximum," and "The Boondocks." In February 2011, Williams guest-starred on USA's "White Color." The following year, Williams was the surprise guest during a taping of "The Oprah Winfrey Show" spotlighting Diana Ross. Williams and Ross were reunited after not having seen each other for almost 30 years. In 2013, Williams made a cameo as himself on "Modern Family" In 2014, Williams competed on the 18th season of "Dancing with the Stars." He was paired with professional dancer Emma Slater but the pair had to withdraw from the competition after week three, due to an injury to Williams' back.

Other Ventures: In addition to his film and TV work, Billy Dee Williams has also found success in the world of TV commercials, famously appearing in advertisements for Colt 45 malt liquor. Williams has also been a featured guest at fan conventions, mostly science fiction ones for his iconic role of Lando Calrissian. In the late '80s, Williams returned to spending a majority of his time on painting. Williams has recorded a jazz LP entitled "Let's Misbehave" and has written two books, "PSI/Net" and "JUST/In Time."

Personal Life: Williams was first married to Audrey Sellers in 1959. They divorced some years later and had one son together, Corey Dee Williams. In 1968, Williams married Marlene Clark. They divorced in 1971. He married Teruko Nakagami in December 1972. They have a daughter, Hanako. They filed for divorce in 1993 but later reconciled and were leaving together again by 1997.

Williams was arrested in January 1996 after allegedly assaulting his live-in girlfriend, who was not identified publicly. He posted a $50,000 bail. In a plea bargain, Williams agreed to undergo 52 counseling sessions. 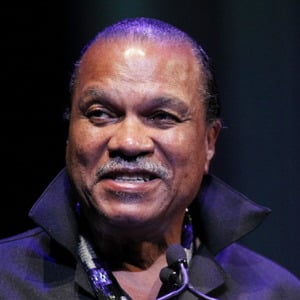